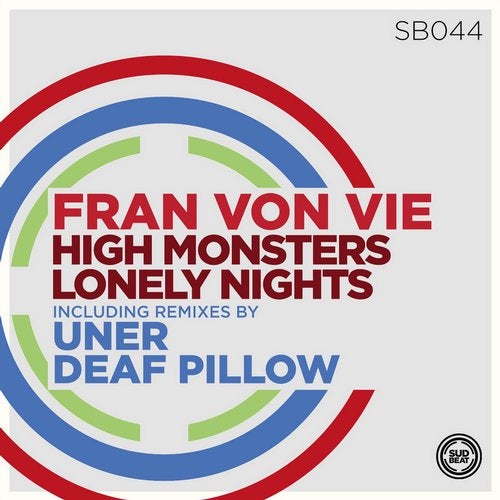 The talent Spaniard Fran Von Vie has released music on Last Night On Earth, M-Nus and Renaissance, and with his musical influences ranging from Sasha to Carl Craig via Richie Hawtin, and with DJ sets around the globe, the future is an ever expanding ray of light for him.
Starting off with High Monsters, an infectious warm yet deep gem, featuring the cool vocal talents of Cio May whispering and flaunting effortlessly across a wash of warmth. The track gently meanders and builds to a tasty electronic drop. This is a rather tasty gem.
Lonely Nights again features Cio May delivering some mesmerising beautiful vocals, while Fran's production holds restraint while the track builds with subtlety being key here. A melodic layered dreamlike voyage that certainly ticks all of the boxes.
Remix duties kick off with Uner tackling High Monsters. Utilising the melodics to great effect, but adding his awesome hallmark mood creating tensions, this remix oozes of somebody seriously on top of their game.
The closing track of the package are from the talented Peruvian outfit Deaf Pillow and their interpretation of Lonely Nights. These guys having released on Get Physical and Kindisch are in fine form here, stripping things right back and provide an understated gem of a remix, deep and mesmerising throughout.