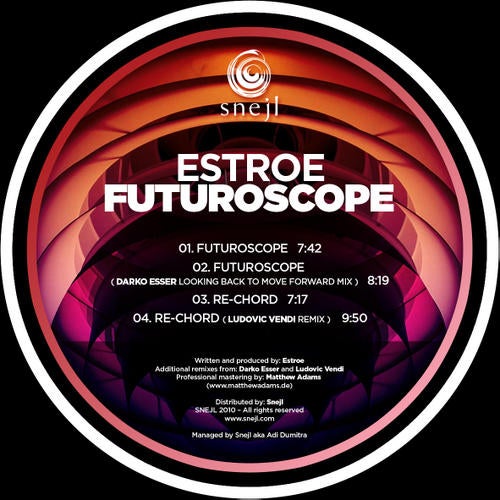 Next release on our sister label Snejl Recordings comes from Estroe, and this is not her first time entering our home.

After a big success with her previous EP Knetter released last year, with remixes from Steve Rachmad, Luciano Pizzella and Dinamoe, we are now ready for another smashing release, featuring 2 originals which feature the unmistakeable Estroe sound .


Futuroscope is a track that evolves into a melodious and percussive adventure. Punchy basslines and those slightly Detroit drum patterns are creating a rather techno feeling over the whole track, leading to a massive breakdown that will set the floor on fire.

Re-Chord is a great melodic tech house track, which can easily be called a club anthem . Delving a bit deep into techy sounds and solid basslines and warm hypnotic grooves, this is going to be a treat for all of you guys .

Remix duties come from the Dutch hero Darko Esser and Ludovic Vendi, both delivering 2 amazing reworks, as a maximum comfort for everyone.