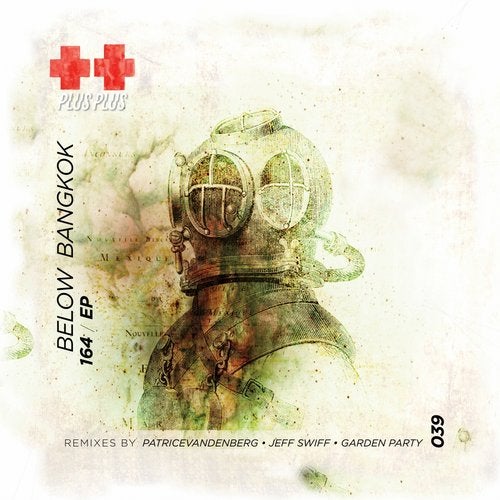 Plus Plus is back with another heater of a release from the talented Below Bangkok. Hailing all the way from Croatia, Below Bangkok delivers an EP influenced by his eastern european roots with a mixture of smooth, organic grooves with hypnotic, spaced out synths over top.

Below Bangkok opens the the 164 EP with his lush vibes of Pickpockets. Thick, chunky groove lays the foundation for the track while dubbed out vocal stabs add an appreciated human touch to the track. A rubbery chord line slithers its way into the track with an offbeat kick proving the the low end bounce.

The EP's title track, 164 opens with warm, organic percussions accentuating the kick and a hissing synth line to get the track moving. More subtle chords make their way into the arrangement, creating a pushing groove with a deep, subdued bassline underneath. Filtered out vocals punctuate the track, coming and going as they please, almost as if your rushing through an airport and hearing your planes number announced over the PA.

Detroit Ghost Hunter features Mr. Sideburns who specializes in more stripped down, ethereal tracks and this one is no different. With a loopy and crisp percussion line opening the track, the kick tight and upfront with synth swells in the background and a bassline that chugs the track to its conclusion.

PatriceVanDenBerg is back once again on remix duties, quickly becoming a favorite among the Plus Plus fans! PatriceVanDenBerg takes the original PickPockets and makes it into a lean and mean groover. PatrceVanDenBergs tight kicks play along with the vintage inspired analog bassline to create a rolling groove with his funky hat programming and snappy percussion arrangement accenting the arrangement. Dubbed out synths soar in the background, making their presence known but never stealing the show. This is PatriceVanBerg at his finest, not holding back and just delivering a beefy tech house groove in the way only he can.

New to the label, all the way from Minnesota, we have Jeff Swiff. A fixture in the Minneapolis music scene, Jeff has been releasing music for a few year now, drawing inspiration from classic hip hop and funk grooves and polishing off a sound that is uniquely his own. Taking 164, Jeff Swiff takes influence from all those classic hip hop tracks to create a slinky, dusty vibe that chugs and heaves its way through out the track. With a throbbing bassline that swells to accent the groove, Jeff introduces a running synth line that sits in the back with a classic Moog inspired lead modulating at its peak. Jeff hit this one out of the park and we cant wait to have him back for more!

Finishing up the EP we have another new comer to the Plus Plus family. Garden Party takes a stab at Detroit Ghost Hunter, and the remix is a classic throwback to when chunky, deep house tunes ruled the land. A rolling bassline highlights the track while loopy, dubbed out vocals from the original run underneath. Birds flutter across the track with a modulating, sustained chord building the tension while the filter opens as the track keeps on building. Garden Party delivers a no-nonsense, late night dance floor monster that will keep the crowd dancing until sunrise.