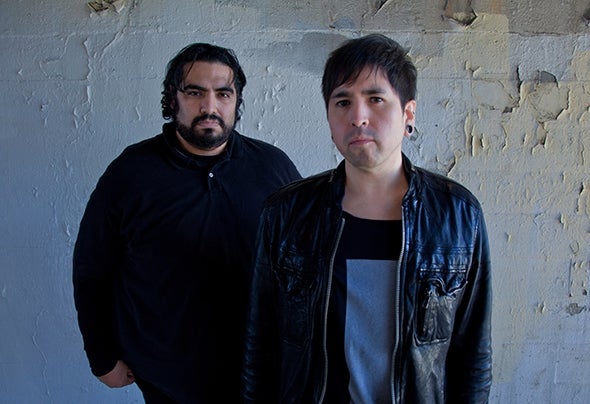 EchoDroides is a collaboration between Chicago nativesFrank De La Mora & Trancid (Miguel Martin). Their soundcan be described a trip through space with synthesizersand drum machines. Influences come largely from geniuseslike Giorgio Moroder, Vince Clarke, Alexander Robotnik,Depeche Mode and New Order.Frank and Miguel have been good friends for a long time.Being involved in the music scene for many years in theirrespective ways. Frank is an accomplished musician &songwriter, having played keyboards on Platinum recordingartist, Disturbed’s debut album and heading a couple ofbands, Echonine & Saber. Miguel is a DJ having traveled allover the country and various spots around the world as partof Dark Wave Disco and spun at Lollapalooza in 2009. Hehas played alongside countless artists such as PrimalScream, Ladytron, Felix Da Housecat, Cut Copy and manymore throughout the years.They always talked about working together on music, butclashing schedules prevented it from happening. Finally inthe spring of 2011 they got together and decided to startworking on some remixes for California's "The NewDivision" and Chicago's "Comasoft". After finishing them up,they figured why not take a shot at seeing what kind oforiginal stuff they can come up with. The result was acompleted EP, titled Telescopic, which was picked up byChicago's Hot Dog Records and released in March 2012.Their follow up releases are a single titled "Vortex" in June2012, and an EP titled Umbra in September 2012. A new EP,Horizon was for released in March 2013, followed by a fulllength album in September 2013. They have recently beenadded to the Red Bull Sound Select artist roster.Horizon recently received great reviews from GiorgioMoroder and Moon Boots after receiving a promo copy ofthe EP.