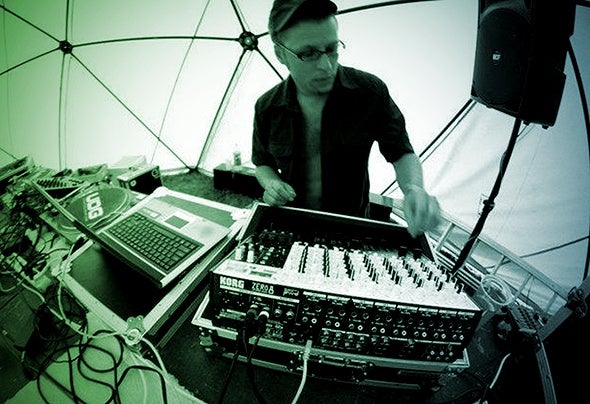 A man of many interests, producer, DJ, sound engineer, liveset performer, graphic designer, member of IO.Lab Records, radio23.cz, drumbass.cz., AKA. IO sound system. He has been devoting himself to music since childhood and, most of all, enjoys its diversity, and that is why he does not stay with one genre only. As he likes to say - “there are only two kinds of music – good music and bad music”. He composes not only the hard dance dubstep, drum & bass, breakbeat, but also the calmer acoustics downtempo and chill out tracks. The beginnings of his creative work date to the wild 90’s, when he would experiment with instrumental downtempo, in addition he also applied himself to the study of piano and composing on his first synthesizer Korg Poly 800. In 1998 he co-founded Paranoja Sound System and took part in the first domestic techno festivals. The free techno scene of the 90’s firmly shaped his musical taste. At that time he started with DJing liveset performances - it was mostly a matter of various subgenres of hardtechno. He was one of the first pioneers of liveset in the Czech Republic. In addition to his solo projects, he also appeared with the project C.M.L., systems Machine Works, Strahov, Komatsu, Tsunami, Oktekk, NSK, and took part in organizing parties such as livesetbattle.cz, 3teknadně, Paroubtek etc. In 2000 he became a member of the Prague sound system AKA.IO. In cooperation with IOSYS he issued his first techno vinyl AKA.IO 01. Two years later he founded an independent digital label and studio, IO. Lab Records. This incited his interest in sound post production (mix, mastering) which led him to work on various Czech projects, such as the Prague Nightmare, Case Records, LXR Records, MikkiM etc. In 2004 he was the origination of a website aimed at the free techno community in the Czech Republic, freetekno.cz. One year later he co-founded a non-commercial internet radio station which plays independent electronic music, radio23.cz, and to this day he takes part in its operation. Until 2007 he performed live with his own liveset performance, then he returned to DJing and devoted himself mostly to bass music. In 2011 he founded, with the Prague producer PKarel, the project WhiteCream, in which he explores the magic of pop music. In addition, he played the keyboard in the indie rock group Project Insane, with which he placed first on the local hit parade of Radio 1 and as second in the Jack Daniel’s talent competition. Presently he is talked about as a great upcoming talent on the Czech dubstep scene. His music is typical for its dark atmosphere, sophisticated composition and elaborate rhythm. His work can be heard on the labels of Case Records, Big Boss, Breakdrum Recordings, Elemental Music, Most Dubstep Records, etc. One of his most successful tracks, “The Dog that Bites” (“Pes kterej kouše”) had stayed in the second place for 14 days in the top ten most sold tracks on junodownload.com. As a DJ he plays vigorous hard dance music of many genres, dubstep, drumstep, 2 step, electro house, breakbeat or drum&bass. He appeared, and still keeps appearing, at many festivals, parties and clubs not only on the Czech territory, but also abroad. Professionally he also devotes himself to graphic design, illustration and advertising.