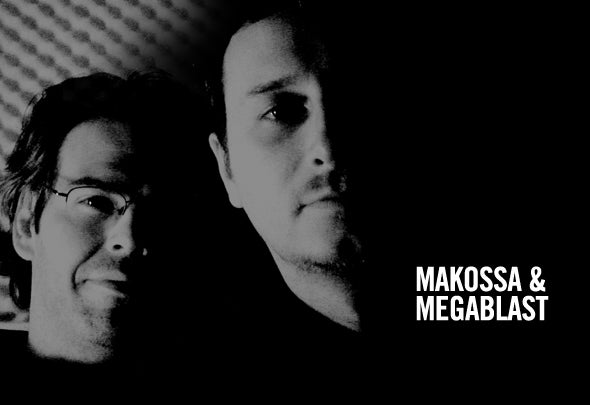 Marcus Wagner-Lapierre aka MAKOSSA is like the 'godfather' of the Viennese Dj culture. He started spinning in the early 80ies and became head of music for Austria's famous and nationwide independent radio station FM4 in 1995. Makossa has influenced and animated thousands of music lovers in and around Austria and is known for his wide range of musical knowledge and taste. His legendary Saturday night show 'Swound Sound System' with Mc Sugar B specializes in deep, dope, dubby & dirty funky, afro, cosmic influenced electronica and has been running for more than 13 years now. Makossa has compiled over 20 successful compilations in the last ten years. (Fm4's Soundselections, Sunny Side Up, Dub Club,…) After a few remixes & productions for/with Uptight, Sofa Surfers & Peter Kruder in the mid 90ies, he finally teamed up with long-time friend Megablast. Sascha Weisz aka MEGABLAST started in the early 90ies as DJ/Producer. Initially inspired by Dope Beats, Reggae, and Hip Hop, he soon developed a passion for Acid House, Tribal and Electro. Still too young for official parties and clubs, he enjoyed the illegal Tech scene and started showing his individual style of producing with his first project 'Luv Lite Massive'. Influenced by all these different kinds of music, Megablast developed his own 'Viennese' sound presenting the output on his highly acclaimed debut album 'Creation' (Stereo Deluxe, 2003). Meanwhile, he has remixed and released for the likes of G-Stone, !K7, Afroart and Pulver. His own tracks have been reinterpreted by such nobilities as Fauna Flash, Yam Who, Stereotyp and Pressure Drop.