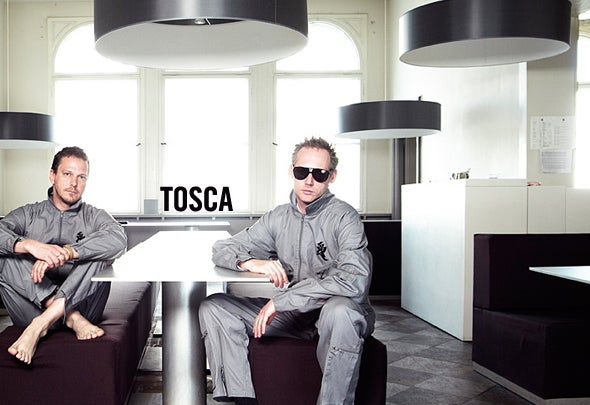 A low world according to chocolate elvis in a town called vienna schooldays Tosca is the brainchild of Richard Dorfmeister + Rupert Huber. Both met in school where they shared the same enthusiasm about music .Very soon they formed their first group called Dehli 9, which was a wild collective, experimenting with tape machines and indian influences, mixed with poetry lyrics. new paths After school everybody went its way . Rupert decided to work in the experimental music scene, while Richard teamed up with Peter Kruder to form the producer/ dj duo Kruder + Dorfmeister. 1993 the G-stone label was launched. K&D became trademark, their K&D remix sessions are legendary. tosca In 1994 Richard and Rupert met again to do a new thing called Tosca. Initially a fun - project, they released their first 12", called Chocolate elvis ( G-stone 12 002 ), which combined classical samples with NYC street-blues samples. The track was licensed to a whole range of compilations and still can be heard on dancfloors worldwide.Their second stroke called Fuck dub ( G-stone 12 003 ) used heavy basslines and freaked-out spoken word clips. opera 1997 saw the release Opera ( G-stone CD 002 ), their first album, which featured old+new tracks and was described as soulful and analogue soundscape . Some saw it as a smooth fusion of ambient funk + delicate dub. The mixmag wrote: It`s the blues, and the thick sultry bass, that make this as sexy and melancholy as cigarette smoke after a one-night stand in a strange city. The new tracks were featured on Buona Sarah ( G-stone 12 005 ) Fuck dub remixes The next step was to bring in mutual friends from all over Europe to work on a remix- series of Fuck dub. It became a very exciting project and resulted in a colourful mixture of versions. Artists + labels involved in this project were: Fila Brazillia, Baby Mammoth ( pork ), Fauna Flash, Beanfield ( compost ), Daniel Haaksman, Shantel ( essay ), Morpheus/ Beanfield (SSR), Gambusa ( studio K7 ), Uptight productions ( uptight ), pulsinger + tunakan ( cheap ) All these reworkings were featured on the latest G-stone release: Fuck dub the remix album (G-stone CD 003 ). Chocolate elvis Chocolate elvis got some serious dubs by artists like Boozoo Bajou, Rockers Hifi, Baby mammoth, Bullitnuts, Quant, Uptight . Chocolate sweet as dope. Suzuki The second Tosca album called „Suzuki“ will be finished by autumn 99. The actual release is scheduled for early 2000. The album features fresh material in the original Tosca style. A 12“- teaser of the album will be out by november 99. Suzuki in dub After the successful release of the Tosca «Suzuki» CD earlier this year, Tosca return with some extra-fine dubs from the original tracks. Burnt Friedman, who is famous for his work as Nonplace urban field and his legendary series on Scape records, opens the album with his typical rhythms, that are his very trademark. Alex Kid`s work with Dubphonic was features on the Subtitled releases on Guidance records, he delivers a highly funky and danceable stormer, that will rock every dancefloor around. Walkner.Moestl had 2 EP´s ( Bluish / Heaven or hell ) out on G-stone so far , they have developed their own sound full of groove and tasty electronics, their dub turned out to be deep and hard. Uko, out of the Klein record label, is dubbing the Annanas track to highest effect, a smooth and mellow version is the result. Sasha from NYC, who is known for his releases for Codek records/ NYC has released high- profile stuff under Organic Grooves and Cosmic rockers. He very much knows about groove+dub. The austrian duo dZihan+Kamien are coming through this year due to their superb production on their couch imprint. Their interpretation of Busenfreund is simply class. Philippe Lussan did some fine stuff as choc electronique on his Invincis label, he is specialised in deep uptempo stuff. Baby mammoth doing it again with a dreamy dub while the Deadbeats-guys are hitting it harder with some tougher mid-tempo beats. The final mix of Groove corporation is again a good example of what it`s about here: dub dub be good to you The world of tosca is always connected to the city Vienna, sounds seen through a rain - drenched cab windscreen, a low world full of bluesy gentleness.