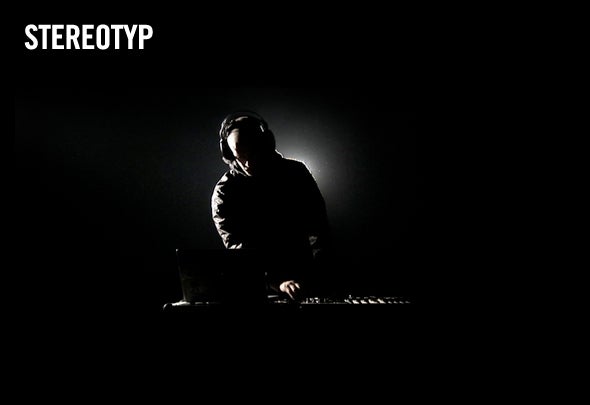 Stefan Moerth, better known to the music world as Stereotyp, is a hardcore producer. And by this I don't mean that the man makes Hardcore music, which he often does, but that his life is all about producing. Stereotyp tours seldom, rarely does interviews, and 90% of his time is spent in the studio. As a result his tracks are meticulously crafted and filled with micro-sonic details that peel away and reveal themselves in complex layers only after repeat listening. An average Stereotyp production is mind-blowing to say the least, and any DJ that had a chance to test his work in a club environment will testify to this fact. Every Stereotyp beat is bass heavy, 5th element type futuristic, and sonically altered. And this goes for all genres Moerth retouches and updates, be it Dancehall, Hip Hop or Soul - and he done touched them all. His now classic G-Stone debut entitled My Sound (2002) was a foray into the future of Dancehall and Soul music. With this release Moerth showed the possibilities of a sonic future that is still due to arrive. Many remixes later, he paired up with Al Haca and dropped, what could be one of the most advanced takes on Dancehall and Hip Hop on the market today - the Phase III (2004) LP released by Klein Records. Just the collabos alone speak for the weight of the Stereotyp Opus. Some of the voices that touched his instrumentals belong to legends such as: Cappadonna (Wu Tang Clan), Daddy Freddy, Hubert Tubbs (Tower of Power), Lady Saw, Hawk Eye, Ras B and Spectacular - to name a few. Just for the record - Stereotyp still lives in Vienna, where he continues to offend the local, but yet internationally renowned Down-tempo scene by pushing a sound Vienna is not yet recognized for. He travels to New York regularly only to get a sandwich and a Snapple Ice Tea from a bodega he likes very much - no joke. And to add a little twist to it all, his studio is located in what used to be a wine cellar, and is currently populated by a total of eight cats and a dog, and always stocked with some premium liquor and quality herb.