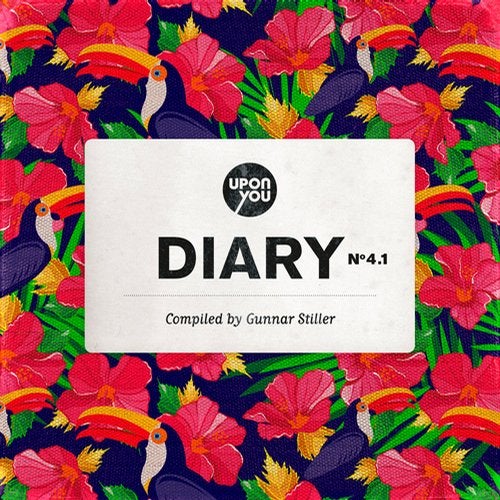 The year is 2014. Nearly two years have passed since the release of our last full-on Upon.You label compilation and it's time to look into the Upon.You-Diary again of which the fourth and most recent chapter is written by our long time friend and stalwart producer Gunnar Stiller who has not only stunned dancefloors lately with his July-released single What's Said Is Done but dug deep into the sonic layers of our universe to unearth shining House- / TechHouse - / TechWhatever-diamonds perfectly reflecting the Upon.You-sound of today and tomorrow. Regularly transmitting quality electronic music for nearly eight years now, with an overall count of more than 100 releases via Upon.You Records and its several subsidiaries, highly appreciated label nights and a tightly knit collective of artists collecting heaps of air miles on their neverending transboundary music mission the label has constantly grown into one of the main forces on the international TechHouse circuit and Diary No. 4 Compiled By Gunnar Stiller weighs in a whole lot of 24 tracks that are providing proof why the Upon.You label sound is stronger than ever these days. Diary No. 4 Compiled By Gunnar Stiller is released in two parts scheduled for October, 27th (Part 1) and November, 17th (Part 2) featuring only box fresh and exclusive tracks that have been crafted exclusively for this gathering of established Upon.You-artists, friends, former remixers and selected label recruits including artists like Marco Resmann, Gunnar Stiller, Alex Niggemann, The Cheapers, Einzelkind, ONNO, Metodi Hristov and many more. Part one of the Diary No. 4 package starts with the mighty Magit Cacoon which is defo not about to Take A Break here although the track name suggests different. Instead of doing so we find her on top of her game with this stunning opener, providing hypnotically pounding drums, rolling basslines and tripping vocals echoing through the stereo field, whilst David Jach's Piano Song fully lives up to his title and turns towards classic House music with beautiful piano stabs on a steadily pumping, warm organic foundation of beats. Finding Love is the mission for Einzelkind of Pressure Traxx- and La Pena-fame and they're about to find it straight at the heart of the dancefloor, in the midst of the sweat-covered, ecstatic crowd happily floating along dark'ish basslines, ever repeating vocal bits and a sweet little, glockenspiel'esque melody playfully peaking through the heavy bass grooves every now and then. The Madrid-based producer Danny Serrano is the one begging all punters to Wag For Me and we're pretty sure to see some shaking butts and wagging tails when this jazzy, percussive, rhythmically complex tune with a latin twist is touching down on peak time crowds. Expect the club climate to be changing for a reason when dropping this one. Following up is Gunnar Stiller with his „Snowcone" contribution of the same name in which the man himself takes TechHouse to a quite techy, straightforward level with hi-hats as sharp as a knife and uberly thrilling, massive and quite surprising synth breakdown meant to set the roof on fire. Pure energy and a new definition of Rave. With Alex Niggemann of AEON- and Poker Flat- Recordings-fame the night turns into a celebration of polished chrome when he caters his contibution Twisted - an enigmatic, iridescent journey into metallic Techno realms with raw snare shots and melodies carved out of liquid metal that could well become an instant classic for a reason. The essence of the collaborational studio force of Fraenzen Texas and Ruede Hagelstein is bottled under their conjunctional moniker The Cheapers which has been part of the Upon.You-family from day dot. Focusing on more melodic, analogue sounding aspects of TechHouse with Rosetta they're weighing in uplifting, playful melody works touched by organic melancholia, modernistic (Neo)Trance-elements and a tongue-in-cheek reminiscence of some infamous Swiss electronic music pioneers. Representing the Leipzig-scene is Daniel Stefanik who explores uptempo realms with the levitating string arrangements of All God's People that might be filed under the flag of being angelic by some or many. Masterly crafted and accompanied by precisely cut, slightly electroid sounding percussion works this one is a perfect example of how emotional things can get within electronic music imagine a crowd loving this tune to bits when the first rays of sun hit a festival site again after a long night under the dark skies. The young producer Pascal Hetzel contributes his Impatience to our Diary No. 4, a thewy, muscular affair with a serious no bullshit attitude. The drums are heavy as boulders whilst the spiralling, off-kilter synths send whole crowds up to new energy heights undreamt of before. This tune's a monster. Valencia-based Marc Martinez Nadal a.k.a. AFFKT teams up with both Jimmy Van M and Luxor for their conjunctional effort that is Holy, a bass-driven journey to the dark side of the dancefloor. Heavy, omnipresent basslines are amalgamated with feverish, psyched out vocals as well as tripping sound effects for a well-intense, haunting ride into veering ecstacy a trip you won't ever forget. This Is by our favorite Kiwi Emerson Todd provides more primetime fodder for avidly heaving collectives longing for ultimate relief and ecstatic pleasure. With constantly building layers and layers of sound and a super effective melody carefully coaxing its way through the sonic density This Is a weapon of floor destruction. DJ tested, floor proved. Finally we see the Italian Enrica Falqui a.k.a. Acirne catering the closing track for the first part of Diary No. 4. In her track A Maina tender, cinematic string constructions are accompanied by whirring, chromatic modulations altering the perception of realtime to a mesmerizing effect. One of the rare tunes that could be stretched out for hours and hours and hours to everyone's full appreciation. Call it Intelligent Techno for a reason.