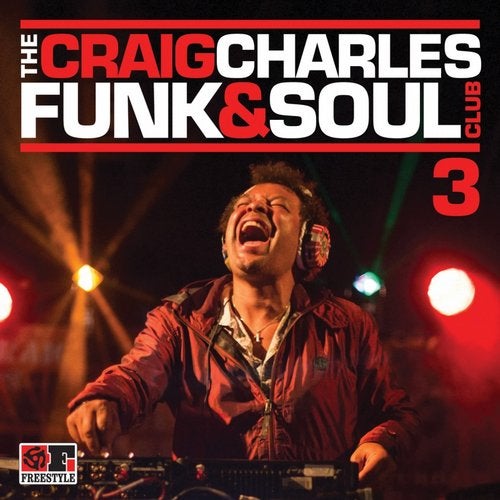 The Craig Charles Funk & Soul Club returns - and Volume 3 is a truly international round up of all things hip, happening and gorgeously groovy!
Since Volume 2 was released a year ago, I've continued my mission to spread the sound of good grooves right around the world, not just via my radio shows on 6Music and BBC Radio 2, or by DJ-ing to a huge sea of humanity at Glastonbury Festival 2014, but I also took my trunk of funk to Australia to spread my kind of dance floor dynamite to Antipodean audiences hungry for fresh soulful sounds and some foot stomping funk.
My brand new selection really does have it all - the feel good, piano pumping, hand clapping work out Do Your Thing by 6ix Toys is a joyous opener that should have anyone with a working pair of legs jumping up to get down.
There is a great selection of seductive, female voices across Volume 3 - Sophia Bastians' gutsy, blues drenched Breaking is a minor key wonder, Sena Dagadus' strutting afrobeat anthem Accra City People rolls over the horizon like a steam train with no brakes - and Juliette Ashbys' sexy and sassy Like A Bass Guitar digs down deep into a funk heavy groove in all the right ways, and The Getups' featured vocalist Sabina Challenger rides on the bands trademark tight Hammond funk groove like an award winning surfer.
21st century neo-soul makes it's presence felt too - Harleighblus' crisp and rugged 'Play Me' leads perfectly to the UK Soul Don #1 Omar's massive tune The Man, the track that became an instant classic and saw the album of the same name top charts and reach places you might not expect, as even long time fan Prince Charles owns a copy!
Omar isn't the only legendary male voice featured - ladies and gentlemen, hold my calls! We've only got the legend that is Afrika Baambaataa featuring onThe Mighty Mocambos funking hip hop roof raiser It's The Music Part 1 - and Australian superstar Daniel Merriweathers' bluesy vocal on Cookin On 3 Burners Losin' Steak makes it clear why people like Mark Ronson beat a path to his door when its talented man tonsils they require! Talking of talent - I have to admit to a major amount of fatherly pride when listening to Lack Of Afro's Missing Me as it is indeed my first born, Jack Tyson Charles handling the vocal duties, it's a beautiful soul number that's one of my favourite tracks of 2014 - and it would be even if it wasn't my boy singing that sweet chorus, nice work kid!
Boogaloo, soul-jazz and latin sounds feature strongly too - Sunlight Squares' Vamanos Pal Monte will without doubt make your dancing feet itchy,Speedometers huge selling reworking of Pharell Williams Happy will have you soul clapping and spinning like you are at Wigan Casino - and Ray Lugo & The Boogaloo Destroyers El Ritmo De Nuevo York will make you feel like your back in late 60's New York partying with Ray Barreto & Mongo Santamaria, and The Andre Espeut Quintets' Let It Go is jazzy enough to make even girls grow a goatee beard.
The Craig Charles Funk & Soul Club Volume 3 does even more than it says on the tin - 19 personally selected, party starting slices of full fat grooves proves, as the saying goes that 3 is indeed the magic number!
Awoooga!
Craig Charles.