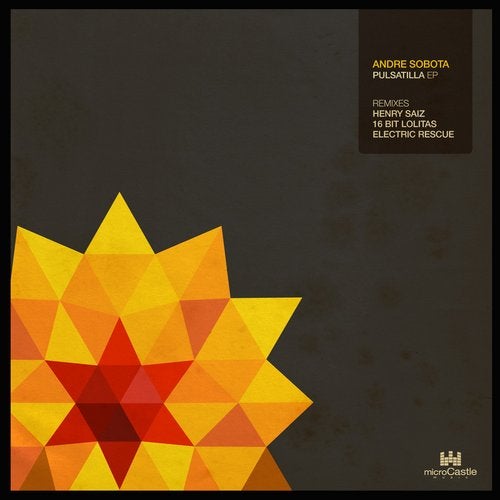 Andre Sobota returns to microCastle for the labels 30th overall release. The Brazilian producer has continued to impress since his hugely successful 'Surrounded By Time' EP from the summer of 2012. Andre's unique melodic sound has been enchanting electronic music fans over the first half of 2013 and he continues to be a firm favourite of Above and Beyond, Hernan Cattaneo, Sasha, Eric Prydz and Markus Schulz. We're thrilled to have Andre back on microCastle for his second EP entitled 'Pulsatilla' which includes 3 brand new original productions with remixes from: Henry Saiz, Electric Rescue and 16 Bit Lolitas. The title track has a unique and refreshing summer vibe that might just be one of Andre's most ambitious productions to date. The warm, sun drenched harmonies play off the grungy low end perfectly for what results in a wonderfully warped sounding melodic creation. This is one production that will have nightclub goers transported to a place far more magical than a dark smoky room. The lone remix of 'Pulsatilla' comes from Henry Saiz who is making his debut on microCastle here. The highly touted Spanish producer has just come off what many feel is this year's best album. 'Reality Is For Those Who Are Not Strong Enough To Confront Their Dreams' was released in early June on Henry's own Natura Sonoris imprint and has electronic music fans from around the world singing his praises. Henry's uniquely organic and abundantly musical sound has melded itself extremely well to 'Pulsatilla'. The result is a production which sounds like the perfect summer anthem. Warm, analogue grooves lay down a funky foundation while catchy vocal hooks and poignant chord changes provide the necessary emotional content which makes for one of Henry's best remix works to date. The second original 'Full Circle' is a light and airy construction. Andre's creative imagination never ceases to amaze and his dynamic beats and delicately interwoven melodies have never sounded better here. The main break is particularly captivating with its shimmering backdrop, grinding build and idyllic harmonies. The unique melodic themes suspend in your subconscious and lead to the reintroduction of the beats for a warm rush of emotion which closes the record out extremely strong. Electric Rescue makes his first appearance on microCastle and provides the lone remix of 'Full Circle'. The French producer just released his ground breaking 'Sonic Architecture' LP on Bedrock and his unique take on techno is routinely championed by Laurent Garnier and John Digweed. For his 'Full Circle' interpretation Electric Rescue has crafted a deep techno rework that comes with an immense dance floor presence. Big character laden beats along with rhythmic stabs and dynamic fills generate some huge momentum throughout. A spectacular remix from Electric Rescue which should be huge on the techno floors all summer. Andre's third and final original on the release 'Lights' would be the most techno oriented piece on the collection. Backed by a driving groove, scattered drum elements and a wavering hypnotic energy which is totally infectious 'Lights' is the ultimate epic conclusion to the three compositions from Andre. The lone remix of 'Lights' comes from 16 Bit Lolitas who are returning to microCastle for their 11th overall appearance. The Dutch duo's 'Personal Space' (released in 2010) has been one of microCastle's best selling tracks and their recent Warung Brazil and Supermarket albums have been fan favourites over the last year. For their 'Lights' interpretation 16 Bit Lolitas have delivered one of their most musical creations to date. An intricate sounding groove sits at the foundation while warm bassy swells and blissful themes carry the track to the main break. The post rock style interlude goes down as one of 16 Bit Lolitas finest moments. A slow building wave of majestic sounding melody that crescendos with a divine, invigorating force that will leave you thoroughly elated.