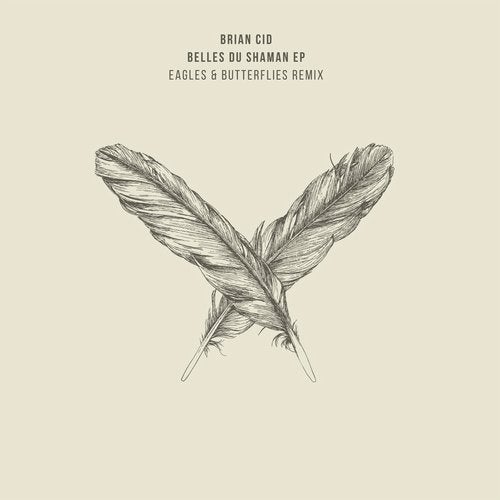 The 43rd release on microCastle welcomes Brian Cid back to the label for a brand new EP. The NYC based artist has enjoyed much success since his label debut in December of 2014. An EP on Hot Since 82's Knee Deep In Sound and a mini LP on Guy J's Lost & Found Records top his 2015 highlights, while 2016 holds even greater promise with a new project for Cityfox on the horizon. Over the last 12 months Brian's sound has taken on a life of its own, increasingly organic and deeply emotional, the US artist has further stretched his sonic boundaries, with luminaries such as Adriatique, Guy J, Hernan Cattaneo, Joris Voorn, Richie Hawtin and Thugfucker now play listing his music. His return to microCastle has been much anticipated and a quiet start to 2016 has only made his rapidly expanding fan base even hungrier for new material. Brian now presents his second EP for the Canadian imprint entitled 'Belles Du Shaman' alongside a remix from Eagles & Butterflies. The release begins with the title track and finds Brian carving out one of his most distinctive grooves to date. Layered beats and mystical pads set the piece in motion before an underbelly of warm bass swells fully initiates the journey. Highlighted by soulful vocal stabs the first act strikes an emotive chord, foreshadowing a break of warm harmonies and cinematic tones, ultimately leading to a third act of timely drops and heart-warming rushes. It's one of Brian's most unique creations and not surprisingly it comes from a special place, as he describes "Belles Du Shaman is a musical story of pain & struggle as well as hope & light. The hard drums and synths set the tone for this deep, pulsating and melancholic EP, that drowns in a sea of sounds, touching every weak corner of my heart. When I wrote this track I had just visited the mountains of Utah, more than 10,000 feet up. In a night of music and stars I was moved by how powerful and meaningful a space in time can be. A land that provides us with water, food, shelter... it gives us life as well as meaning. Imagine losing this. How it can impact our life and culture as well as our history and being. The end result of all these feelings and realizations came out in this track." The lone interpretation of 'Belles Du Shaman' is provided by Eagles & Butterflies who is making his first appearance on microCastle. Currently based in Los Angeles Chris Barrett aka Eagles & Butterflies has quickly become one of the underground's most inspiring talents. With a contemporary flair and fresh approach to production, the Dixon and John Digweed favourite has not surprisingly found a home on both Innervisions and Bedrock, along with Get Physical and his own Spread Your Wings imprint. 2016 has already been met with several highlights including EPs on Bedrock and Exit Strategy along with a remix of Italian pianist and composer Ludovico Einaudi. For his 'Belles Du Shaman' interpretation Chris has stripped the track down and reinvented the elements over a punchy groove, carrying the main themes on a more subversive journey. A wonderfully warped third act, complete with dynamic fills and a twisty emotive lead, ultimately seals the tracks brilliance, making it one of Eagles & Butterflies most sought after remixes this year. The EP's second selection 'Plastic Memoir' finds Brian crafting what might be the most heartfelt composition of his career. It's ten magnificent minutes is highlighted by subtle emotive shifts, minimalistic yet powerful grooves and a melody that will resonant in your heart long after the night is over, as Brian describes "Plastic Memoir was written to be a long musical journey. Something magical happened when I played these melodies on the keys. I must've hit some notes that took me back to a memory that never really existed, but made me feel vulnerable in a beautiful way. That's where the title 'Plastic Memoir' comes from. A memory that really wasn't there - or was it? maybe from my past life? who knows. I kept it musically minimal and focused on the melodies which grow strong and then weaken throughout this magical trip." The release concludes with the appropriately titled 'Eternal Sunrise'. A groovy, percussive journey with haunting motifs and sultry rhythms. With a deeper emotion and sense of reflection it rounds the EP out with an uplifting moment, as Brian states "Eternal Sunrise is the brightest record of all, although it holds a deep tone to it. The early morning hours of the desert inspired me. Moments of joy delivered by the rays of light. A bright new day that takes you into the unknown. Loopy percussive rhythms and melodies that suck you right in. This track is the perfect sonic interpretation of that moment in time and soul."