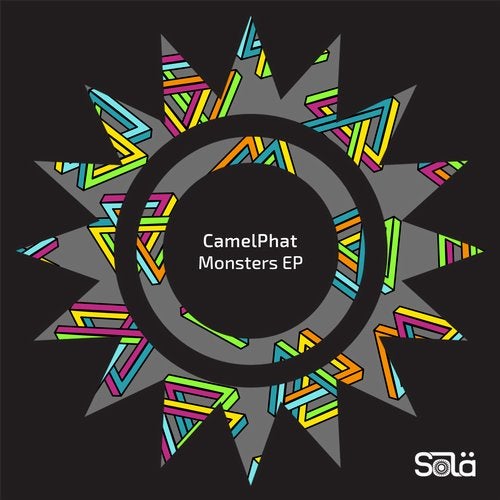 When an act impresses the likes of hugely successful house/techno DJ duo Solardo, it's time to sit up and listen. The latest release on Solardo's label Sola is proof of their supreme tastemaker status: Monsters EP by CamelPhat is out on 22nd September, ready to eat up the dancefloor of every good club.

Lead track Monsters is as immense and beastly as its title implies: a colossal sound with hefty beats and a build that sends us hurtling through this unstoppable big room track. You'd think the B-side would fade in the shadow of Monsters. Nah. Drop It has an enthralling space-scape vibe, underpinned by a soulful bassline & a vocal hook that that gets you "jumping like a disco" too.

CamelPhat have been tearing up the festivals this summer, having played at HideOut, Tomorrowland, SW4, Boardmasters, Creamfields, Sundown, Reading and Leeds. So it's no surprise that their most recent release, Cola (a collaboration with Elderbrook), reached #1 in Beatport's Top 100, DMC Buzzchart, BBC Radio 1 Dance Chart, BBC Radio 1 Hottest Record In The World & is currently sitting at the top of the Ibiza Shazam charts.

CamelPhat are clearly enjoying a meteoric rise in the house scene since their genesis in 2010. Previous releases The Act, Paradigm, Make em Dance, The Trip, Lizard King and Constellations have had DJ support from a wide spectrum of djs Annie Mac, Carl Cox, Steve Lawler, Dennis Ferrer, Eric Prydz Solomun and Pete Tong, with the list of DJ fans grows longer with every CamelPhat release. And like this EP's title track itself says: "You'd better believe in Monsters".