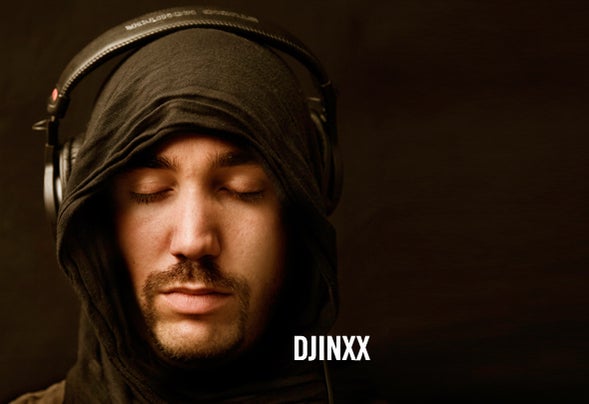 DJINXX aka Electronic Resistance Fine producer, bold jockey and gifted label owner, Djinxx increases in power on firm bases. Owing to his latest EPs on Jericho, Neuton or Ovum and thanks to the growing reputation of Mezzotinto, his prolific production platform, the French musician is now at the top of his potential. By dint of working with key-figure labels and artists since his beginning fifteen years ago on the French electronic scene, Djinxx naturally became a key figure himself. When one remembers his feats of arms during last years, one can pinch oneself: a four-EP series for F... U F-Com (Laurent Garnier's F Com dancefloor oriented division) an invitation by Sven Väth on Cocoon, the expansion of several labels run from the South of France where he lives among several of the best artists of his kind. Djinxx is establishing himself as one of the most productive and talented French artists. Hence, on this account he was chosen by audio brand Ecler as its worldwide representative icon. That background and his various pseudonyms (Soul Monkey, Electronic Resistance) show Djinxx's intention of making a name for himself as manager (he runs his record labels from A to Z) as well as an accomplished artist. His inside out knowledge of the dancefloor regarding electronic music from deep house to techno to digital house is also found on the various musical tinges on his numerous labels. So within this universe of projects we can clearly tell today the difference between Djinxx the producer and on the other side Mezzotinto the platform on which he has concentrated for the last few months the lifeblood of his production. Since Sahkatek, his « collector » label, has been brought to completion with the ten releases initially planned, Soul Monkey and Electronic Resistance kept aside for special projects (collaboration around Djinxx' own productions), Djinxx has refocused on Mezzotinto changing it into an international label very much in the public eye. « On this label each release is a risk-taking one. Jockeys know when they'll listen to those tracks they will be completely disorientated. » With Mezzotinto, Djinxx has turned into a talent scout: «My aim is to develop a proper identity for artists releasing EPs and not to produce standard tracks which at the end might sound dull ». The only criticism one may address to the producer is to launch musicians too early before they really bloom. « On the contrary, that's a quality and the strenght of Mezzotinto to shed some light on musicians that will be discovered on established labels a few months later! » To make that point obvious, one only has to listen to the latest releases (also available in digital files exclusive to Beatport): Chymera, Gary Beck, Mark August, Mogdax, Martin Skogehall, Artificial Latvamäki... No wonder, some of these artists have been signed under licence on compilations launched by Steve Bug, Ellen Allien or Agoria. This comprehensive approach encourages Djinxx to develop his own productions crossing swords on a split EP released on Ovum with Xpansul, one of the most highly-rated and inspired Iberian artists. Hence it will also help him to relaunch his LP project many a time postponed which will allow him to perform live in the next few month in order to affix his stamp where his career was born: in clubs.