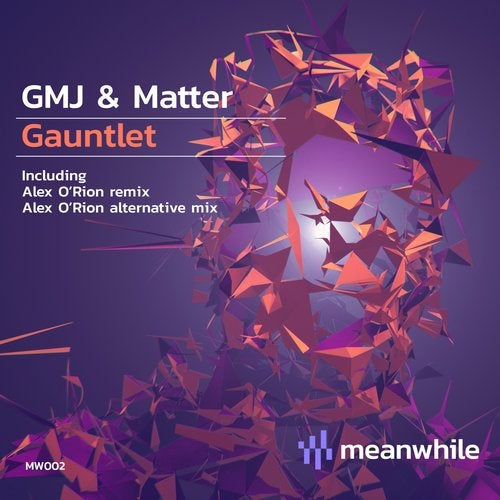 Following quickly on from the success of its debut release, Meanwhile once again sees the talents of label owners GMJ and Matter come to the fore with their multi-coloured sonic palette in the shape of "Gauntlet". A pair of remixes come from an iconic Dutch name.

Fresh from the success of their debut three-track EP, GMJ and Matter now reprise their collaborative partnership with the rich and seductive tones of "Gauntlet". Opening with a pounding beat and looped pad, a rippling arpeggiated motif wends its way across a smoothly filtered path. Evolving with trademark ease melodic variation adds subtle intrigue as white-noise washes shimmer off the sonic horizon. Imperceptibly, a lead line makes its presence felt against the raft of grooved elements while intermittent effects add new depth and interest.

Alex O'Rion is an artist requiring little introduction to those cognisant of modern dance music history. A regular across the clubs and festivals of his Amsterdam home, appearances at ADE and the city's Westergasfabriek club have highlighted O'Rion's talents behind the decks while international performances in Germany and Ibiza have continued to see his reputation grow. Able to claim ownership of a production catalogue to rival any, O'Rion's prowess for over a decade saw early work find a home on the likes of Black Hole and Songbird. Continuing to develop his sound with immaculate precision, 2018 saw a debut on Hernan Cattaneo's Sudbeat Music with the "Wisteria" EP before the two-part "Amalthea's Horn" followed later that year. February 2020 saw a third offering in "Alone". Moreover, Cid Inc.'s Replug and Nick Warren's Hope have also become home to O'Rion's original production work with Mango Alley also contributing to a triple-century of production credits.

Now debuting on Meanwhile, the first of two remixes is a thumping club rework with rolling groove and intelligent use of the central arpeggio that played such an integral role in the original. Extending the scope and cadence of the swathe of melodic components, Alex O'Rion's skill is to reimagine them in ways that provide a new focus to "Gauntlet" while retaining the melodic themes inherent in GMJ and Matter's work. The result is a gloriously multi-faceted offering that is a tribute to the Dutch star's remarkable talent.

The "Alex O'Rion Alternative Mix" illustrates a deeper side to the Dutchman's production work with its head-shaking grooved bassline and syncopated hi-hat pattern. The central motif so prevalent in the first remix is stripped back to illustrate rippling delayed patterns alongside steam-powered white noise washes, while a cavernous glissando bassline adds depth and power post-breakdown to imposing effect.

As GMJ and Matter run the "Gauntlet", remixes from Alex O'Rion punch with an iron fist.