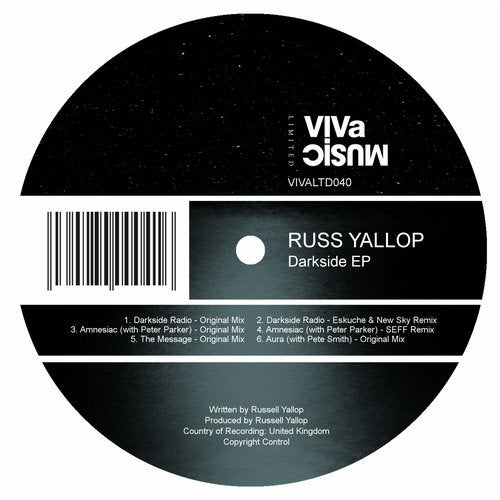 Russ Yallop's meteoric rise over the past few years has seen him establish himself as a key part of the new breed of UK house music producers that are taking the underground world by storm.

First releasing with them in 2011, Russ has since become a fully fledged member of Damian Lazarus' Crosstown Rebels, as well as putting out cutting edge music with No.19 and the house heavyweights Hot Creations, alongside close friends Lee Foss, Richy Ahmed and Jamie Jones.

To name only a few, Russ' previous releases have been supported by the likes of Steve Lawler, Carl Cox, Maceo Plex, Heidi, Skream, M.A.N.D.Y. and many, many more.

Boundlessly energetic and lusciously warm, the Darkside release is a showcase of the tight and well-honed productions that Russ has made his name with. Darkside Radio features an enticing groove, punctuated by acidic elements and kick started by a lo-fi vocal sample reminiscent of old school P-funk DJs. A powerful bassline dominates Amnesiac (featuring Peter Parker) and intricate, scattered percussion blends seamlessly with chunky low-end to create The Message, a powerful floor filler. Aura (featuring Pete Smith) is perfectly titled, with atmospheric piano and vocal stabs bringing the release to a hypnotic conclusion.

Remixes come from Eskuche & Nu Sky on Darkside Radio, and SEFF on Amnesiac.

Fresh off the back of an incredible release on Hot Creations, NYC's Eskuche & Nu Sky have been supported by Marco Carola, Maya Jane Coles and MK. Their remix is pure bass weight from the very first beat, with snappy and echoing percussion and synth samples that create a modern yet vintage feel. This is absolutely not to be missed!

SEFF returns to VIVa MUSiC Limited, reworking but retaining the punch and groove of Amnesiac, creating an infectiously bouncy, rock solid remix. Releasing this year on Material and WOW! Recordings, SEFF has recently signed an EP to Hot Creations for 2015. Expect to see big things from this hot UK up and comer!