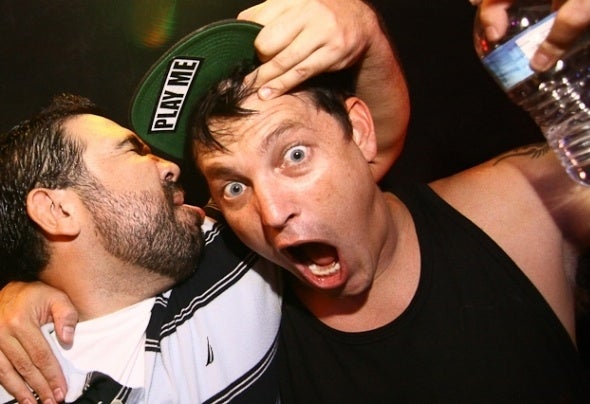 Dubstep/Electronic music producer from the beaches of Huntington Beach, California was signed to Play Me Records with his debut release "Smash the Floor" which was on Beatport's dubstep top ten charts as #1for 8 weeks as well as Beatport's overall genre charts at #32. The release entitled "Summer Smash" includes "Smash the Floor" featured on BBC Radio 1's Annie Mac Mash Up Mix show and Annie Nightingale's Radio 1 Breaks show, as well as Skinz UK along with the electro dubstep smasher "Skytop" crowning him Best Breakthrough Artist of the 2010 in Dubstep. Playing alongside some of Dubsteps greatest DJs and Producers such as Skrillex, 12 Planet, Plastician, Downlink, Liquid Stranger, Vaski, Reidspeed, FS and many others We Bang is a product of dubstep sounds filtered into 80's synths, melodic melody and rave stabs wrapped in heavy bass that will take you on a journey of pure dance floor destruction. In 2011 Paula Abduls show "Live to Dance" on CBS had one of the Semifinalists "Dance Town Chaos" use "smash the floor" in part of their dance routine. One of the star judges Kimberly Clark said "Their choice in music gave her that DUBSTEP FLAVOR". With releases on Play Me Records, Sub Chamber Recs, Tuff Love Dubbs, LU10, Heavy artillery and co-owned label Smashed Beatz along with big remixes for Deekline and Ed Solo's Shake da Pressure We Bang remix out on Rat Records and Centralstation music 2011, Micky Slim on Cr2 Records, Telegram from the Queen on Juvenile Scum as well as sponsorship from Umbrella Clorthing, 2010 was a great year. Recently We Bang linked with Natty Freq in late 2011 to take their tunes to the next level and creating the project Mustache Riot DJ/Live act with forthcoming tunes on Legendary Drum and Bass Producer/DJ Shimon's Audioporn Records set for early 2012 and their debut Album on Smashed Beatz. 2012 is the year everyone Bangs. “WE BANG”