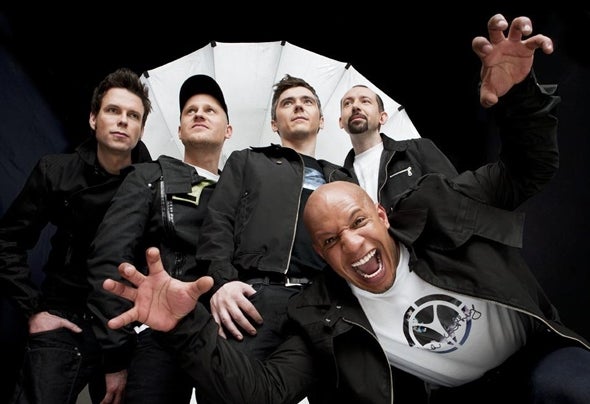 Brains is the most successful live band in the genre of electronic music in Hungary. On top of their smashing main stage performances at festivals and sold out club concerts countrywide, they filled the long standing PeCsa Music Hall to the brim twice within 4 months in the winter of 2012/13.Still, the story of the band was not always a victory march: there have been several changes in both line-up and style since the beginnings in 1994. The emerging band favoured hardcore before switching to funk rock--at one point, the line-up even boasted of wind instruments. Three records preserve the memory of this era: Színek (Colours, 1997); Semmi komoly (Nothing Serious, 1998) and A Dunakanyar rasztabanditái (The Rasta Bandits of the Danube Bend, 2001). T heir following album, Humanual (2006) marked the birth of the "modern" Brains with MC Columbo joining the band. Top Shotta in 2008 brought a powerful mixture of styles--drum & bass, hip hop, and ragga--that came with an impressive live sound, helping Brains to evolve into one of the most exciting live bands of Hungary. In 2010, changes in the line-up brought two new members in the persons of Zoltán Ujj (drums) and Levente Lukács (keyboards)--both known from Másfél--, and this new, 5-piece formation recorded and released Refresh the Style; an album more straightforward, party-rocking and eclectic than its antecedents. The album and the 2 years of intensive touring that followed brought the band a long- desired breakthrough: Hungarian radios played four of its singles in heavy rotation and Brains was confirmed as a permanent member of the Hungarian concert scene. In the spring of 2012, the music industry nominated Refresh the Style for Electronic Album of the Year at the Hungarian Music Awards.The band is steering towards international waters with its freshest album, Full Range (April 2013). The special guest of this new release is Sian Evans, singer of the cultic Brit electro band Kosheen, who has returned to international limelight recently by featuring on a DJ Fresh song. In addition to Sian, several other guests contributed to Full Range: old friends like Z eek and KRSA (PASO), and the co- stars of Brains’ year-end concert in 2012, Punnany Massif. The 11-song album is a direct descendant of the previous two records: it has a drum & bass spine and blends in almost the entire range of the current genres in electronic music from dubstep through drumstep to electro and break. No wonder: Brains members--both as individuals and as a band--are inspired by a multitude of different musical genres, and they concentrated on utilizing this inspiration Brains even more than before.