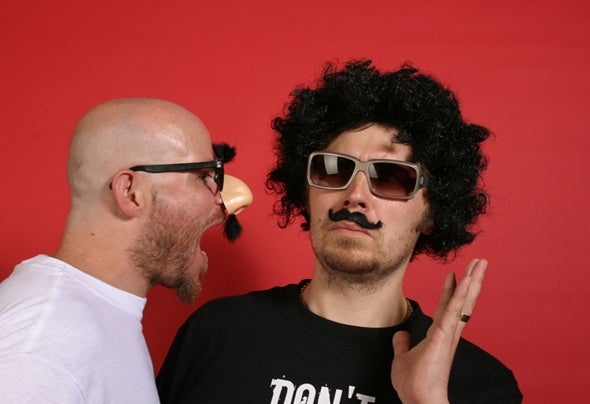 Do you “fit in”? Does your dancing blend in with the others on the dancefloor? Does your music taste occupy an area so middle of the road you may as well be a white line? Or do you surf white lines of more exotic varieties? Well, if you’re the former you will probably want to look under M for Katie Meluurrghhh. If your tastes and predilections are more “advanced” however, let us introduce you to The Rejekts, ejected not so much from the local disco as the entirety of civilised society. These two Rejekts have inhabited clubland long enough to find most of it slightly limp, impotent and sterile these days, tiring of the music-by-numbers approach of DJs and labels, preferring instead to drift out to the fringes and fight a guerrilla war against mediocrity.Iain Taylor kicked off his DJ career at the Haçienda in 1995 and since then has been involved with some of the greatest parties in the north, including Airtight, and a six-year stint for Tribal Sessions at Sankeys Soap. In that time he has also DJ’d all over the world, with tours through China and South America, and parties on some rock called Ibiza. DJ Magazine saw fit to describe him as “DJ, producer, promoter, miscreant and thoroughly decent chap”, which just about sums it up. A chance meeting led to his collaboration withMa Saski, Himself a veteran of the Second Summer of Love, and equally hacked off with the state of clubland, Ma Saski aims to bring back the energy of those pioneering Blackburn raves and as such, has found a kindred spirit in Iain.It’s a two pronged attack. The Rejekts skirt that fine line where things are not so much illegal as... well... not legal. Their warehouses parties have reenergised the nocturnal landscape of the north, attracting disillusioned revellers keen to tap into something with integrity and vision. The Rejkets numbers have swollen, now a cult-like assembly of good, good people, following Rejekt parties across the UK and across Europe and as far and wide to places such as Slovenia and Beijing and, where they partied in peace or some rock called Ibiza where they now hold a residency at one of the world’s most celebrated super clubs, Space. If you can’t come to the parties though, the music can come to you.The rEJEKTS have set up their own label which thankfully so far has been a success, having released tracks and remixes from the likes of Argy (Poker Fla (rEJEKTS) and with an extremely exciting EP’s and Tracks from Gamal Kabar & Marc Ashken alongside more REJEKT output penned for the Spring and summer of 2013rEJEKTS own productions and releases have worked their way into the DJ sets of some of the world’s top underground jocks, including (to name only a few) Sven Vath, MANDY, Richie Hawtin, Sasha & Digweed, DJ Hell, Pan Pot, Claude Von Stroke, Steve Lawler, MR C, Layo & Bushwacka, James Lavelle, Funk D Void, Stephan Bodzin, Loco Dice, Tania Vulcano, Nic Faniculli, Exercise One, The Italoboys, Vector Lovers, Tom Stephan and even as far afield as the likes of Hernan Cattenaeo and Jaques Le Cont! They have also released tracks and remixes on Dirtybird, Exun, Ohm & Peepshow recordings to more bewielderment, acclaim and worldwide reviews.Their production skills and notoriety as DJs has lead to regular gigs up and down the UK, throughout Europe and as far afield as the USA, South America, China & South East Asia and onto Australia. Their worldwide appeal is bolstered further with all the tracks available to download from over 150 of the world’s top download sites and mobile phone networks including iTunes, Beatport, Juno, DJ Download & Vodaphone worldwide. “So do you think society welcomes you to its bosom? Well, If you live out your life in discos it means you... like all of us... have been necessarily ejected from polite society. Discos are the only places that will have us now. Join us. We are all Rejekts”t / Cocoon), Gummihz (Mobilee), MODEM (Disco Electronica), Odnah