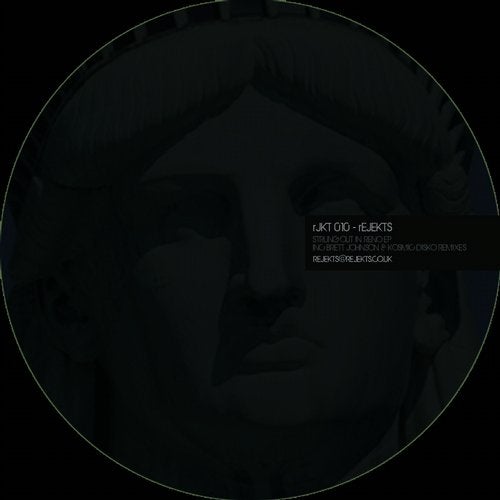 Part 2 in a series of 3:
The prequel to our "7 Years of rEJEKT" double mix compilation due for release in August 2015

Wow! It's been a heck of a journey . . . And long may it continue . . .
As part of the ongoing adventures of "some blokes who call themselves rEJEKTS for some reason" we are happy to offer more gems from the studio. We were originally going to put this EP out under the alias of "Species" and not as a rEJEKT release (when you hear it you'll understand). It's a more organic and musical vibe to the normal deep throbbing slightly "weird shit" that we have made a career from releasing. We hired the Hungarian Philharmonic Orchestra (surprisingly cheap) to do the strings for a film project we were working on (their voices and laughter can also be heard on our 2011 release for Maintain replay called Username Password). . . . . .

Anyway! The lush rich sounding strings inspired us to try something a little different with a more organic sound. We're not claiming to be the next Kruder And Dorfmeisser or anything but still, we think we gave it a good effort.

Now all this forward thinking poses a new problem. Who cool enough to remix such gems? After minutes of deliberation we came upon the good eggs that are Brett Johnson (Of previous Visionquest / Get Physical fame and one of the original US house producers on labels like Phil Week's Robsoul and Derrick Carter's Classic Music Company) and also Mykel Haze (Hot Creations / Noir Music) who happened to be launching his new Kosmic Disko alias at the time and offered to submit 2 remixes. Both are sublime and the first of which appears on this EP. File under alternative . . . . . .

A1 - rEJEKTS - Strung Out In Reno (Original Mix):
First up we have the namesake song. This was originally set to be released under the new alias of "Species" as it is not what you could exactly call indicative of the general rEJEKT sound. The track features the Budapest Philharmonic Orchestra and rEJEKTS have approached the production from a more organic angle. It still has that left of centre vibe which is associated with the label but with a much more musical almost "Live Band" feel to the track with a bass guitar throbbing bassline, rich orchestral strings, live drum samples and timbales. For sure it's still going to do the business on the dancefloor and forward thinking House and Techno DJs will be able to work this into their sets but it is also noticeable that the choice of remixes help to even up the sound of the overall EP and give the listener a diverse experience filled with new direction alongside the usual high quality electronic sound fans of rEJEKTS have become to expect.

A2 - rEJEKTS - Strung Out In Reno (Brett Johnson Remix):
The first of the remixes comes in the form of Brett Johnson who has also been active with releases on Vision Quest and Get Physical of late. Brett's pedigree comes from his early productions for seminal US labels like Derrick Carter's "Classic Music Co", Phil Week's "Robsoul" and of course his own "Dot Bleep" imprint. What you get here is a more main room house track. Brett has taken the bassline and thickened it up to give a more "Dub" sound. The beats are tighter and the overall result is something that will be much more favourable to stalwarts of the UK / US house sound. Brett has kept the lush rich sounding strings and made clever use of the original drum samples resulting in a track that offers up a noticeably different vibe to the original whist also staying integral to the core elements.

B1 - rEJEKTS - Strung Out In Reno (Kosmic Disko Strung Mix):
Kosmic Disko represents a brand new project from Mykel Haze (Noir Music / Hot Creations) and Monoman (Permanent Vacation / Robsoul). They take their remix in a much different direction to the original. Again they opt to use the drums and strings from the original but have worked them to make them almost unrecognisable. This is what you could call a "Techno Monster" of a track and evokes thoughts of previous classics like Jaydee's "Plastic Dreams" or Rolando's "Knights Of The Jaguar". It has that epic feel to it! It is sophisticated, hypnotic, complex and intelligent but most importantly it just works on the dancefloor. We are very happy to be able to showcase some of the first productions to be aired by Kosmic Disko and look forward to working with them again in the not too distant future.

B2 - rEJEKTS - Skiinfog(Original Mix):
Another track where the rEJEKTS have decided to explore a more "Organic And Musical" sound. This time though you can hear more of the original sound that you would associate with these guys. The de tuned synth, cheeky melodies, the sound of a K hole but this time probably in the amazon forest or a beach in the Ushuaia region of Argentina. Again the drums and the bassline retain the organic feel or "Strung Out In Reno" but this time it's synths instead of strings and the undertones of the original rave sounds of the early 90's. Overall this is a fantastic Ep with a rich diversity of sounds and vibes.
The rEJEKTS simply ask 1 more thing. Please enjoy irresponsibly! Much Love From Planet rEJEKT x

Please publish the following links alongside any coverage you give to these tracks:
Rjkt010 - https://soundcloud.com/rejekts/sets/rjkt010-rejekts-strung-out-in-reno-ep-inc-brett-johnson-kosmic-disko-remixes

Strung Out In Reno