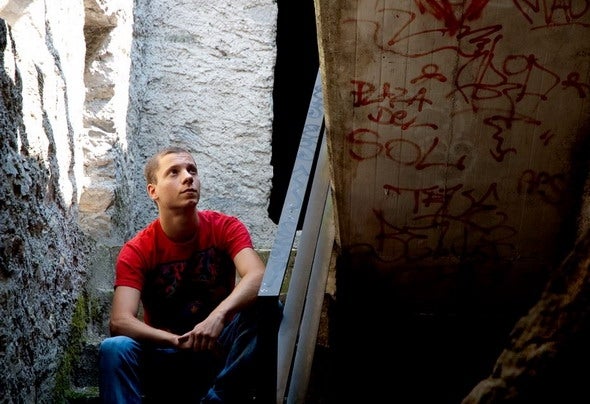 Cazzato Chris (AKA Chris Liven) was born on August 7th of 1990. Chris touched his first instrument, a keyboard, when he was just 6 years old, and with that he experienced his first musical notes. Along the years he improved a lot musically by hearing several kinds of music from his dad, who was a DJ in the 80's, ranging from House to Disco music and he also discovered Techno and Trance music that he took a liking to at once. When he was around 12-13 years old he started to experiment for the first time with simple sequencers when he had some free time, only as a hobby though. When he became 17 years old he decided to become a DJ and producer using professional sequencers. He did not stop in his pursuit and kept producing, until his music was released for several labels. But today, Liven reached a big goal coming out for Darknet with an EP named "Milky Way" which contains 2 original mixes and 2 remixes by Manu C., a good friend of his and by Kroman Celik. This EP, available on Beatport.com was released on February 24th, 2012. At the moment a fresh EP titled "A.G.W.", which contains 2 original mixes and 2 awesome remixes by Audio Injection and Concrete DJ'z has just been released on Armatura Records, the date being February 19t h, 2013. He has always been orient ed t owards Electronic music, also appreciating old groups and singers. For instance, he had particular interest in the band Imagination, the singer/dancer Michael Jackson and so on; this was influenced by his father. His music is mainly based on a very dark and dub matrix, which fits the "Underground World". His first DJ experience was on May 29th of 2008 (a truly important date to him), participating in a DJ contest, reaching the finals surprising the public in a very good way. From that day Liven was called to participate in different parties around Switzerland proposing a particular and innovative sound characterized by gloomy and dynamic elements. Chris Liven will keep working, trying to offer the best he can.