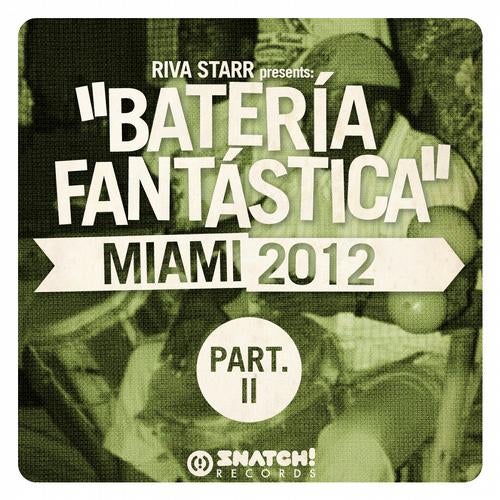 Riva Starr has been cooking up a special batch..Batería Fantástica is set for release on Snatch! in April and features a special blend of exclusive & original South American flavoured cuts made especially for you by some of the coolest producers on the planet. Heavily influenced by the cultural and musical history of the South, and homage to the early Miami days, label head honcho Riva Starr called upon some of his favourite producers to create and collide, to form a unique and rich cultural flavor that is unlike their usual sound. The tracks have been exclusively crafted for Batería Fantástica with two collaborations from Riva, one with DJ Sneak, and the other with Guti. Other artists on the album include Carl Cox & Jon Rundell, Butch, Nouveau Yorican, El Pocho, 2000 And One & DJ Madskillz, Ramon Tapia, Pirupa & Spada, Toto La Momposina, Aldo Cadiz and more. "typified by a tonguein-his-cheek and an ear that wanders around the world in search of new sounds". (Resident Advisor) Talking about his inspiration behind the compilation, Riva says: I come from Naples, South of Italy and South of the world. I have always had a very strong connection with the sounds and atmospheres of the South. Thats why I wanted to involve some of my friends in on this special project where everyone creates a track, exclusively made for this album something different and fresh. The guys delivered a whole range of tracks, from huge bangers to deep & dark to the more groovy, warmer vibe. This album will get your feet burning. FIESTA! The launch of Batería Fantástica begins in Miami @ Mokai on March 22nd. The lineup comprises of Riva back2back with DJ Sneak, Guti (Live), Pirupa back2back with Ramon Tapia and Leon. 3 EPs Will be released prior to the compilation, and will be in two formats, Digital / Limited Physical (single CD/ double Vinyl) all tracks are exclusive.