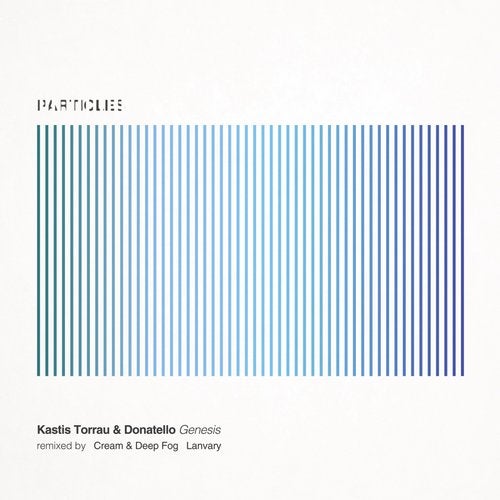 A rip-roaring success on Proton Music in spring 2016, Kastis Torrau and Donatello showcased their distinctive and silky production skills via the "Genesis" EP. With Particles already releasing a pair of "Ida" remixes, the title track itself now receives two new interpretations.

Polish duo Cream and Deep Fog have been a driving force behind the underground progressive house scene. Accomplished and established DJs in their own right, Cream has spent almost a decade as resident of Chilli Club in his Rzeszow hometown, additionally acting as a sound engineer and DJ in clubs across the city of Jaroslaw. Part of the Sentence booking agency, Cream has continued to make waves in Poland and beyond. Compatriot, Deep Fog, has developed a strong understanding of audio engineering, mastering and sound design. Starting to produce his own music in the mid-2000s, Deep Fog's sound rapidly evolved with full-length albums featuring on Mistique Music and Sounteller Records in 2012 and 2013. Together, Cream and Deep Fog have developed a shared passion for electronic music that has seen several successful releases across such labels as Electronic Tree and Soundteller.

A clutch of production credits for Particles that centres upon the "Neverland" EP in August 2015 and includes contributions to the "Summer Particles 2014" compilation, the Cream and Deep Fog Remix of "Genesis" is a strong groove-oriented affair that pulsates dramatically with heavy side chain compression. Oozing production quality with intelligent use of Torrau and Donatello's original components, these combined with a raft of additional components adds further depth. The result is to create something that resonates with the original track but takes it into deeper, darker realms in impressive fashion.

Forming a 'double-headed dragon', United Arab Emirates residents, Alex and Andrew, have caused quite a stir with their Lanvary production pseudonym. Starting from diverse musical perspectives, the duo combined their talents, experimenting "in melting various ingredients in their musical kitchen". This recipe for success quickly provided the pair with a string of impressive releases after a debut on Mistique Musique in November 2010 with their "Airtight" EP. Since then Lanvary have gone on to deliver over a century of production credits for such notable imprints as Underphunk, Stellar Fountain and Suffused Music.

Particles accounts for several of these production credits, centred upon a trio of twin-track original EPs in "Micromegas", Slingshot Ride" and "Penumbra" over the course of 2015 and 2016. Indeed, it is with the latter, released in November 2016, that has seen support from such celebrated quarters as Nick Warren, Cid Inc. and Kobana. Now returning to Particles for a debut remix, the Lanvary interpretation of "Genesis" is a rippling, hypnotic work that drives forward with strong kick and clicking percussive groove. Ready-made for dance floors, a subterranean bass line extends club appeal while additional production material via emotive chord progressions and pad washes add depth and texture in abundance. Retaining the strong melodic foundations of the original track, this is a work of high class and technique.

Two new remixes from Cream and Deep Fog and Lanvary have created a brave new world for Kastis Torrau and Donatello's "Genesis" to inhabit.