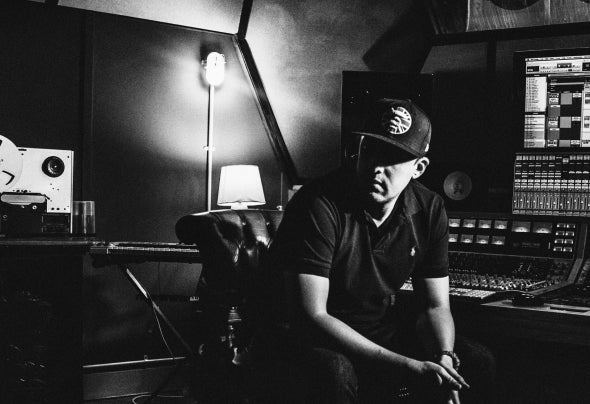 Moving to London from São Paulo eleven years ago, S.P.Y was quick to establish himself within the UK drum+bass scene.After six months of working with only basic equipment, S.P.Y’s natural talent for production saw his first ever release signed to Metalheadz in 2005, with a release on Hospital’s Medschool imprint soon following in 2006. S.P.Y began collaborating with artists such as Marcus Intalex, Total Science, Kasra and DJ Marky. In 2009 S.P.Y released his first solo EP on Marcus Intalex’s label Soul:R and had releases on many other labels including Digital Soundboy and InnergroundThe following years were immensely successful for S.P.Y, with Friction including five S.P.Y tracks on his MoS compilation and Andy C featuring four tracks on ‘Nightlife’. Proving his production quality and consistency in 2010 / 2011, S.P.Y delivered standout releases on Ram, Metalheadz, Critical, Shogun and Spearhead – Most notably the anthemic ‘By Your Side’. S.P.Y also took on high-profile remixes for the likes of Deadmau5, Claude von Stroke, LT J Bukem, Chase & Status, Delilah and Zinc ft. Miss Dynamite, with S.P.Y’s own personal re-lick of Zero 7’s ‘In The Waiting Line’ becoming a signature in his live sets.Signing to Hospital in 2012, his debut LP, ‘What The Future Holds’ was released to critical acclaim. The LP not only received significant support from fellow artists and topped online sales charts, but was also awarded the coveted ‘Best Album’ at the annual 2012 Drum & Bass Arena awards. S.P.Y backed up this release with a relentless tour schedule of Australia, the United States, Canada, Russia, Asia, New Zealand and Europe.S.P.Y’s skills behind the decks rival his studio talents and he delights fans with an educated blend of old school classics and fresh new beats.Always one to stay true to his roots, S.P.Y has a unique ability to bring his trademark underground sound to a worldwide audience. Alternating between beautiful, orchestral, musical sets and dark, rolling mixes, S.P.Y captures the emotions of the crowd. Whether he is playing at a high-profile festival or an intimate club show, S.P.Y always delivers.In 2013 S.P.Y was again busy touring the world, playing at major festivals such as Tomorrowland, Global Gathering and Electric Daisy Carnival. He delivered successful remixes of James Zabiela’s ‘Perseverance’, Chris Malinchak’s ‘So Good To Me’ and Five Knives’s ‘All Fall Down’ on Red Bull Records. In addition to these achievements, S.P.Y was also selected to write, in collaboration with London Elektricity and Diane Charlemagne, the theme song for the 2014 Street Child World Cup. T he track ‘I Am Somebody’ has helped to generate awareness and bring a new interest to Street Child World Cup, advocating for street children’s rights worldwide.Moving into 2014 and S.P.Y is taking us ‘Back to Basics’ with his second LP. Released in two parts over the coming months, ‘Back to Basics’ draws inspiration from the deeper, darker sounds of drum+bass, and features collaborations with Total Science, Rene La Vice, and vocalists Diane Charlemagne, Grimm and DRS MC.If any D+B artist can truly claim to be the “producers producer” then Carlos S.P.Y surely has a good case. If the comments on this album by his luminaries are anything to go by: "One of my fave producers" says DJ Hype, "Carlos back to his filthy best!" say Total Science, "There's only one S.P.Y” says Doc Scott.