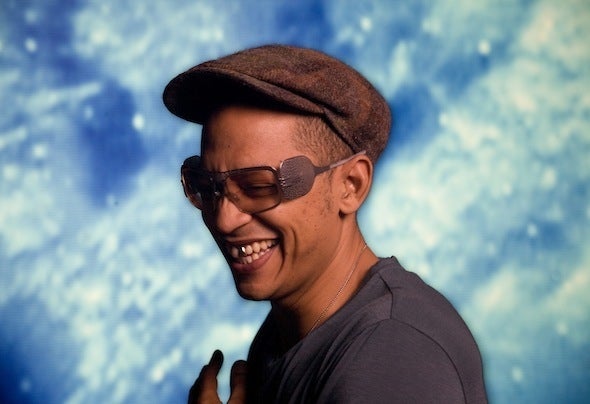 When the man behind those wire rimmed glasses and that disarming smile writes his job description just what does he put? The man who took the drum and bass concept from a small venue off London's Charing Cross Road to the nation's superclubs and then onto the international stage? The geezer whose records launched breakbeat into a brand new galaxy of sound? Or maybe he just writes 'Renaissance man for a digital age'. In truth LTJ Bukem is all of the above. Although he wouldn't like to admit it, LTJ Bukem is the living embodiment of the post-acid house entrepreneurial creative spirit. He is a mild mannered energy flash whose panoramic musical vision has found success in every area he has explored. From running soundsystems to cutting up breaks at raves, from relocating the heart of breakbeat culture to redefining the spirit of drum and bass, the man known to his friends as Danny Williamson has sat at the forefront of breakbeat evolution, lighting the way with little more than a zest for life and a love of music. In other words, LTJ Bukem is a man on a mission! Bukem's first introduction to music was, like so many others, through piano lessons as a child. Unlike so many others however, the young pianist turned out to possess a natural talent and he quickly moved through the piano grades. Classical music represented the soundtrack to his home life. Both parents having a passion for Rachmaninov and Tchaikovsky that rubbed off on their son. However it was when the family moved to Watford and Bukem changed music teachers that he developed his first true musical love. Thanks to a progressively minded teacher called Nigel Crouch - with whom he lost touch but, after a long search, has recently found again - he was introduced to the world of jazz fusion, a style which has informed his work ever since. In the mid eighties, at the age of seventeen, Bukem discovered the joys of clubbing. The teenager regularly checked out the local soul clubs and legendary rare groove all dayers. As a keen record buyer he soon became interested in the idea of putting over his own version of the club soundtrack and before long he got involved with a sound system. Throughout this time he also had a jazz funk band, although this had never presented itself as a serious past-time just fun. The DJing was his main thing and by 1987 he gained something of a reputation for his sets. However it was 1988 that Bukem first realised that DJing could offer a full-on career. In 1990, LTJ Bukem got his first big break at Raindance. Booked to play between one and two AM in front of 10,000 people, it was the first true test of the fledgling DJ skills. It may have taken all his mates to push him onto the stage but it proved to be a set that he'll never forget. From the first track he ripped it up and LTJ Bukem, the world class DJ was truly born. Around this time Bukem had also ventured into the studio to record a track which was to become one of the most influential records of the era. Called 'Logical Progression' it surfaced on the newly formed Vinyl Mania imprint. At once anthemic and relaxing it offered the first true blueprint to Bukem's sonic vision. By the time of his follow up to 'Logical Progression' Bukem had set up his own imprint. Run from a small office in Harlesden, London, the label was christened Good Looking and its debut offering came in the shape of 'Demon's Theme'. Finished in mid 1990 and pressed up onto dub-plate, Bukem dropped it into his sets for a full year just to test the reaction before he finally released the track officially in July 91. 'Demon's Theme' caught people's imaginations immediately, its soulful combination of rushing breaks, lush ambience and mellow vibes opening up fresh vistas within the increasingly dark ambience of the rave.