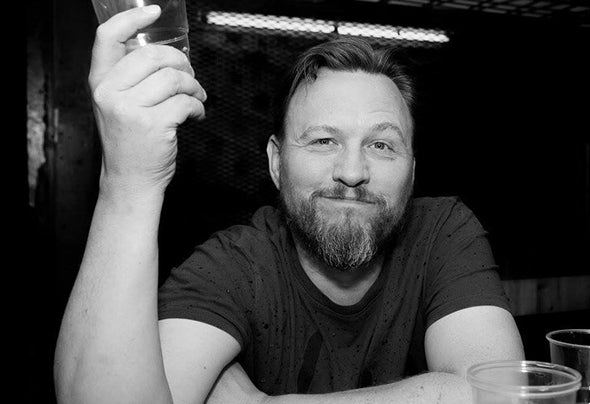 The stuff of Norse folklore and with a brilliant mind undulled by over two decades of raving, despite his greatest efforts, POoK is as confident deploying bangers from his studio as he is storming dance floors with his inimitable mix of relentless beats and vivid melody.Inhabiting a harmonic ecosystem from inception, he has spent a lifetime gathering inspiration from artists as diverse as: Hawkwind, Hendrix, King Kurt & Fred Wesley and the Horny Horns – and from genres ranging from punk, break beat, psychobilly and acid house.With solid foundations hammered into the cold, dark, granite of the Welsh Mountain free party scene, his musical journey has seen him stick to roads less travelled and choose to remain in the darker realms of the sub-terra.Initially concentrating on carving out his space as a DJ, organic growth from the 90s rave scene and through early progressive house - it was then that breaks became a real thing.Fully embroiled in the scene and never content to simply exist, it was during this time (circa 2000 onwards) that his much lauded brap.fm radio show “The Beatroute Sessions” received regular nominations for “Best Radio Show” at Breakspoll. With breaks his chosen rhythm for nearly a decade it was not until 2010 when he rediscovered techno and prog- house that his focus switched back to 4/4.It was with this move across to driving beats that also came the decision to hone his production skills – PS1 Music Maker made way for Logic which was then switched for Ableton and rather than selling his soul for quick fire success, spent time diligently putting in the hours to learn and craft the exceptional skills he holds today. Now certain in his sound and ability to consistently deliver; initial releases including “Lola” (Dino Audio) have seen huge support from the likes of Dave Seaman, Davide Squillace, Aly & Fila, Paride Saraceni, Danny Tenaglia, Paco Osuna, Cid Inc, Solarstone, Soul Button