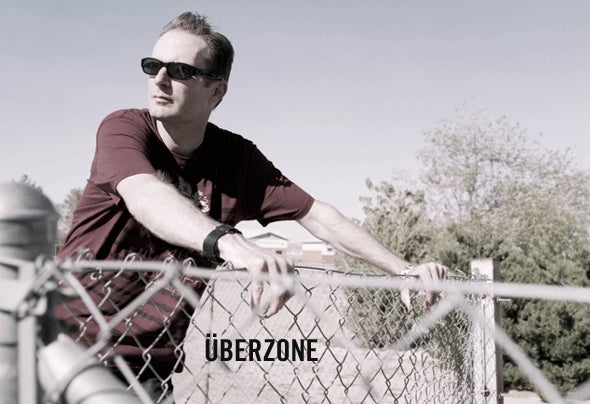 UBERZONE – Ideology out August 21st 2007 Uberzone equals innovation. With his new Nitrus Records release Ideology due out July 31, Uberzone’s Q remains on the cutting edge of electronic music. Over the course of the album, he forges a diverse and enthralling soundscape that challenges listeners. Beats build with a mechanical vibrancy as synthesizers and keyboards blaze through a dreamy haze. Tracks like “Satisfaction” couple pulsating, anthemic club rhythms with a tonally intricate atmosphere. These songs not only rock the dance floor, but they also make for an intriguing sonic ride. Programming and creating everything from scratch, Q infuses a piece of himself as well as his passion for electronic music into every track. These obsessions have helped Uberzone create the ultimate club and chill record, traversing an entire sonic and emotional spectrum. Q burst onto the scene in the mid1990s with the mega-singles “Botz”, “The Freaks” and “2Koo4Skool.” Released via indie- tastemaker label City of Angels, these tracks created a serious buzz and blew up in clubs around the globe. Riding this wave of success, he was commissioned to remix tracks for everyone from Sarah McLachlan to The Crystal Method. His rapid ascent continued in 2001 when he dropped his solo debut Faith In the Future on electronica powerhouse Astralwerks. The album further carved his identity as a true innovator in the scene, featuring a diverse list of collaborations including dancehall superstar Beanie Man, Helmet’s Page Hamilton and UK breakbeat don Rennie Pilgrem, to name a few. However, his sophomore full-length Ideology stands out. He transcends the limits of typical dance music and creates an aura that pulls the listener in. Q exclaims, “The whole vibe behind the Uberzone project is to be an ‘Over-Zone’ or ‘Super-Zone.’ It was envisioned to be this area of creativity with no limits, that was the concept behind the project when I started it. I could go into the studio and write a bunch of banging club tracks, but I’m looking for more than that. I definitely geared this record towards the dance floor, but I wanted to make something you can listen to with headphones or in the car as well; I’ve done that since the beginning. Each track was built on a foundation of strong ideas, hence the play on words Idea-ology or Ideology.” That mission was certainly accomplished with the new album. Regarding the creative process behind Ideology, Q explains, “To me, the most engaging aspect of writing electronic music is the interaction with the gear—whether it’s a drum machine, a synthesizer or a piece of “found sound” that I’m manipulating in Reaktor. The whole process is the part that I love the most. I love the creative building blocks of the music. The more you’re involved with every single facet of the music, the more your identity is going to be engrained.” One listen to focused, infectious cuts like “FUBAR,” and it’s obvious that Q’s charismatic and creative personality has found its way into every note of the new album. Ultimately, personal identity is paramount. “I want my identity to show through and I want integrity, passion and soul to show through.” The soul of this record is based in evolution, as each track takes on a life of its own. Album closer “M87 Black Hole” illustrates this concept. The song is an electronic lullaby. Entrancing guitars build with ethereal keys and provide the perfect end to the album’s futuristic rollercoaster. What do you do for an encore? You perform the album live…he’s set to tour all year to support his Ideology. Bringing out the V-drums and playing with tangible passion, he creates a visual and aural live experience that’s rocked crowds worldwide. From Korea to Germany, Australia to England and America to Spain, there are few places Uberzone hasn’t tread. Joined by veteran performing partner DJ Davey Dave this energetic live show really separates Uberzone from the pack. Q concludes, “I do put my heart and soul into it every time I play and I’m having a good time with it.” Ultimately, his Ideology will make for a very bright future in clubs and beyond. – Rick Florino