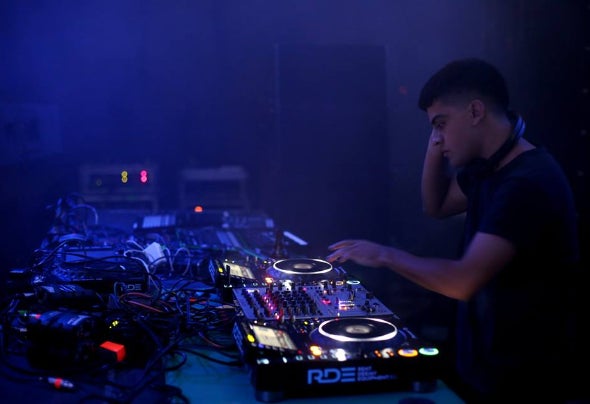 Nicolas Bornia aka Farceb born in Buenos Aires (Argentina) began his career in 2010 taking his first steps in music production. His influences come from both old and new school, shaping his musical style conveying different atmospheres and feelings in both his tracks and sessions. His music was performed by many renowned artists such as Oscar Mulero, Jonas Kopp, Pfirter, Antígone, Shlømo, Lewis Fautzi, Kwartz, Matrixxman, Cleric, Amelie Lens, Ben Klock, Charlotte De Witte, Exium, DVS1 among others. In 2013 he made his debut at the Cocoliche club in Buenos Aires together with Oscar Mulero (PoleGroup), one of the most important figures in the world techno scene. In 2014, he was part of the new Argentinian label called Orióni, releasing his first track on vinyl with other Argentinian artists such as Mental Resonance, Pulse One, Luis Ruiz and Jonas Kopp. In 2016, he released two EPs called "Signal From Space" on MindTrip and "Phase Modulation" on ARTS, two of his best releases to date. In 2018 he announced his first European Tour and collaborated with a track on a VA for Polegroup mixed by Jonah Kopp. Thanks to his first tour and the success as a result of this tour, he made his debut at Tresor in 2019 together with Christian Wunsch, PEARL and Rommek and 3 months later he was summoned again to the same club for a second presentation together with Steve Bicknell and Jonas. Kopp. Farceb throughout its European tours has managed to perform in a large number of important clubs and festivals such as Gare Porto, Khidi, Instytut, Griessmuehle, Prisma, Utopia, and many more. https://soundcloud.com/farceb https://www.instagram.com/farceb__/ https://www.facebook.com/farcebmusic