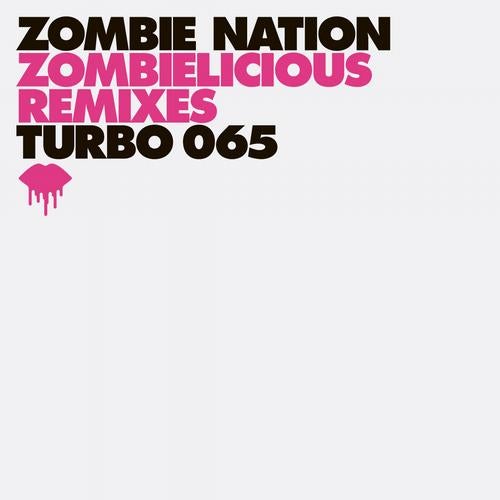 Zombielicious is one of the best dance albums of the DECADE. When I first heard it I badly wanted to license it for Turbo and we almost did. Zombie was even into the idea, but the timing was bad, so we decided to put together a Turbo-riffic remix pack instead. Bad idea compared to getting every incredible moment of that album... but luckily the result is amazing.
First of all, I LOVE and respect mr. Zombie, but mixed in with all that admiration is actually a touch of FEAR. Flo is so dope on every level... everything he's done, the videos for Kernkraft and Worth It, the vinyl packaging of his LP, his press shots, stickers... it's all awesome... and he does it all himself with his friend Wolfram in the uber-city of Munich. It's all spot-on. Flo is intense. I've never seen him make a mistake, though I have seen him get shit-faced and play Beyonce... but that just proves he's got huge balls and loves divas.
Basically I reeeally didn't want to disappoint him, but the trouble is that trying to get great remixes is like fishing for music... you never know if you're going to get a giant tuna or a little sardine. Luckily, we took the analogy to heart and busted out THE CAVIAR!!!
That's right... the world's favorite Russian is back with another total devastator... He kept the best of 'Shottieville' intact, adding only the hint of military-industrial might it needed to achieve complete dance-floor annihilation. Proxy is a poet for the ages, and this is probably the last remix you'll hear from him until his album drops in the fall.
Next up are Arveene & Misk, hot off their remix for Mr. Oizo and the production of Yo! Majesty, these Irish 'lads' are ones to watch and this remix of 'Worth It' is a big winner.
Milano is back with another dose of deep underground techno, a worthy follow-up to his excellent remix on Turbo 063.
Shadow Dancer, hot off his debut album release, turns in a smooth-yet-chunky acid groove.
Last but not least, Hey Today! (!) pull off a massive heavily-ZZT-influenced banger with their remix of 'Radio Controlled.'
5 great remixes that prove a whole lot of love for Zombie-man. Hope you enjoy!
X
T V P