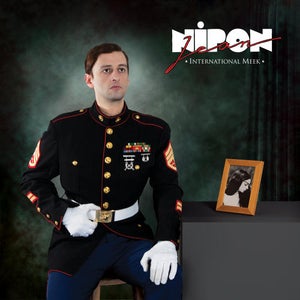 We dont expect you to know who Jean Nipon is because, frankly, neither do we. And yet, hes one of the Institubes originals, he was behind our third record ever, under the name Teamtendo. And yet, he is a fixture of the Paris club scene, building bridges between all the various, dysfunctional crews. Hes even roommates with one of us, but let me tell you: snoring patterns, however entertaining and quirky, say very little of the heart of a man. Nipon is a fractious, peculiar creature. He agrees to no rules and no higher power, and under the veil of unassailable coolness, remains an enigma.

Jean Nipon started out as a drummer in Hardcore bands and got into DJing circa 97. At first it was a cheap ploy to get more in touch with his fellow humans (read: get girls). Then it became something of an art form, and many a reveler remembers his seven-hour sets at Paris Paris where, as a resident, he would play the latest bangers in custom-edited form, plus Prince, Minor Threat, Aphex Twin and the Beastie Boys, Dinosaur Jr and Lio, Pink Floyd and Shellac, My Bloody Valentine and KRS One. What he does with those CD decks Nobody can touch him. We've also seen him funcrush a couple of yuppie parties that didnt deserve to dance: hes a man of principles.

Let's rewind it back: hardcore drummer, DJ, designer, lives in Japan for a year, designs a Coke bottle, sells records for two years in Paris at Katapult where he meets DJ Wet with whom he starts I.Y.M. (a 12" on Wwwilco) and Teamtendo. Teamtendo was a duo of giant plushies who played 8-bit-gabber-electro on tricked-out Game Boys (a 12" through Institubes and one via Deco). Does some remixes for TTC, Ark, Micronauts, Cosmo Vitelli, Lesbians On Ecstasy, Adam Kesher, David Rubato. Directed three volumes of the DJ-oriented «Eurogirls» vinyl project for Arcade Mode with Orgasmic.

With his last EP «Wild At Heart» (2008) Jean Nipon stepped up on his own as a member of the Institubes family, with full privileges and key support from dj Mehdi, Ajax, Jojo De Freq, dj Neoteric, Jerry Bouthier, Franki Chan, Jonty Skrufff, Autokratz and many others.

After one year as art director of the historical Régines club in Paris, two years touring (including two residency runs at the lovely Baron de Tokyo), producing and remixing (French Fries and Lee Mortimer among others), Jean Nipon is back.

This new EP marks Jean Nipon's stepping into the very exciting field of tech house dominated by insanely talented friends of the label such as Style Of Eye.

The main track « Cairo » starts like a joyous martial affair before being totally corrupted into a very sexual thing, driven by a super catchy riff overarching the whole tune and playful edits.

And we were fortunate enough to have it remixed by none other than Nipons favourite producer TONY SENGHORE. This irresistible hands-in-the-air rework features a VERY familiar melody whistled by Senghore himself while managing to keep the muscular parts of the original. Seriously expect this one to become a staple for the early months of 2011!

On the flip, « Stamina » reminds us of Nipon's taste for labyrinthic structures and micro sinusoidal build ups tangled around each other like staircases in a MC Escher painting swarmed with wonky synths.

Remixing duties for this one goes to parisian talent FRENCH FRIES from the very promising Youngunz stable. The wonder kid takes the track into a great Kuduro rave visited by chopped up dancehall vocals and divided in the middle with a gorgeous bridge evoking the best of the forward-thinking contemporary UK scene.

All in all, a uncompromisngly club package, already supported by the Sound Pellegrino Thermal Team among others.