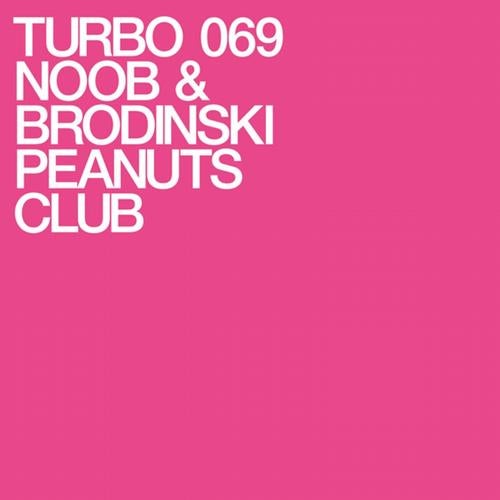 Two of Turbo's rising stars come together to make one of the biggest records of the year.
Peanuts Club has been arguably the hottest track of the summer for heavyweight DJs Erol Alkan, Tiga, and A-Trak. It's instantly catchy and massively effective, and we've seen it bring the best out of the crowd night after night, but you probably already know all about it.
The real coup here is that Cajou Club is another absolute bomb, maybe even better than Peanuts Club, and more disturbing evidence that France has produced yet another two major-league players in dance music.
Noob's really been hitting his stride lately, following on terrific remixes for Brodinski and D.I.M. and Tai's Lyposuct, his productions getting exponentially bigger with each release. As for Brodi, anyone that's seen him play knows he has all the makings of a star, and if he can keep putting out records this good, the sky's the limit!
Wanting to go beyond double-megahit and attempt quad-bomb status, we commissioned two terrific remixes from Sound Pellegrino's Renaissance Man. Noob & Brodi are in love with them, plus they're the only Finns out there to have NOT produced a record for Turbo, so it was a perfect fit. The 'Ph 0' remix on the vinyl is, incredibly, an original take on acid, it's loopy and weird, but works like magic.
In digital-only flavor, we have their 'Ph 7' remix, a housier take with a great muted version of the infectious Peanuts hook. This one is a hit, we just left it off the vinyl to give Peanuts Club the 45 RPM treatment it deserves. Momma's Boy aka Mikix the Cat adds a pumping afro-jack version to complete the package, and there you have it... a crazy potent release, et en plus c'est numero soixante-neuf osti!! on niaise pas a'c la puck!! ENWOUEILLEEEEELA mon homme tu vas aimer ca ce recorr'la! pas des affaires de chochottes la, dla vra' musique...
Love from Quebec,
Thomas Von Party