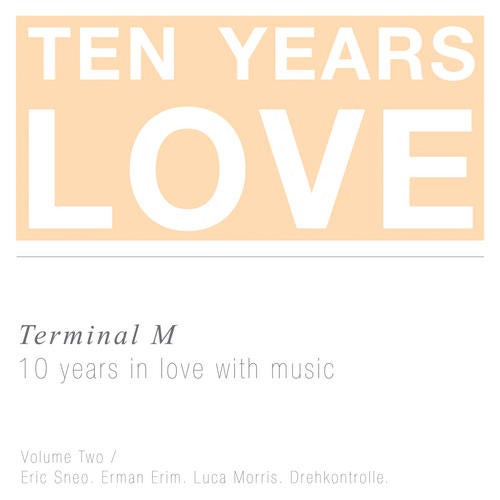 2010 sees the ten year anniversary of Terminal M. 'Ten Years In Love With Music.' To celebrate our first ten years we are releasing two 12" compilation EP's, plus digital bonus tracks, from well known Terminal M artists and some exciting newcomers. July saw the release of 'Volume One', the finest of first courses, which featured tracks from Stimming, Fabio Neural and Olderic. Today we present 'Volume Two', with music from Eric Sneo, Erman Erim, Luca Morris and Drehkontrolle, all backed solidly by our digital cuts from Manon and Gabriel Rocha.Whether its as resident of the famous 'Palazzo' (1998), party promoter (2002's TanzDer Familie), co-founder of the Master Of Disaster and Beatdisaster labels or German and International chart artist (2003's 'Ciao Bella', Tube Tech 'The End'), Eric Sneo has been at the forefront of electronic music for over twenty years. The multi-instrumentalist's live show currently sees him touring Europe's festival circuit, but he's found time to rework his 2008 number 'TM Reloaded'. A Carl Cox favourite, the original has been moulded into a hugely funky, tech-house roller.Neumarkt lad and label regular Erman Erim brings yet more of his melodic charm in the form of 'Whistled Wisdom'. With three EP's and two remixes already under his belt for the label, Erman has established himself as a firm favourite with the team. His energetic live sets and unique vocal-led productions are a pleasure for both listener and DJ alike, and this brand new production is no different. Inspired by his regular visits to Sevilla, 'Whistled Wisdom' with its deep throbbing bassline, bongos and Spanish vocal (from the man himself) is another real highlight for the label.Luca Morris first came to prominence via his residency at Padova's famous 'La Scala'. Since the late '90's he has played alongside and warmed the floors for most of the major international DJ names. Luca who owns the 'Polar Noise' imprint with studio partner Paul C, first made an appearance on Terminal M when invited to remix Monika Kruse's album track 'Hope'. This led to the release of his very own 'Ribotrex' EP which found huge support from many of the Techno elite. 'On Disco 2' sees Luca once again displaying his trademark drive and groove. Hypnotic to the end, the track is broken by cheeky, filtered cascading breaks, creating great hand in the air moments.Having entered the industry in 1997, taken time out to start a family, and been drawn back by his love of electronic music, Drehkontrolle is now set to make a huge breakthrough with his forthcoming productions. Having held a residency at the 'Smokin' Gun Club' since 2008, and produced alongside his fellow resident P.A.-Trick, its now time for Drehkontrolle to go it alone, on the incredible 'Der Sturm'. Lovingly twisted, deep and hypnotic, this gurgling bass-heavy beast is set to shoot our man straight into the well deserved spotlight.Rounding out the promo package are our two digital exclusive cuts from Switzerland's first lady of Techno, Manon and Uruguayan sensation Gabriel Rocha. Like a black widow spider, Manon entices and traps us with her devilishly sultry vocal number, and Gabriel brings us a large slice of South American, percussive funk. A fine way to close this superb birthday installment.