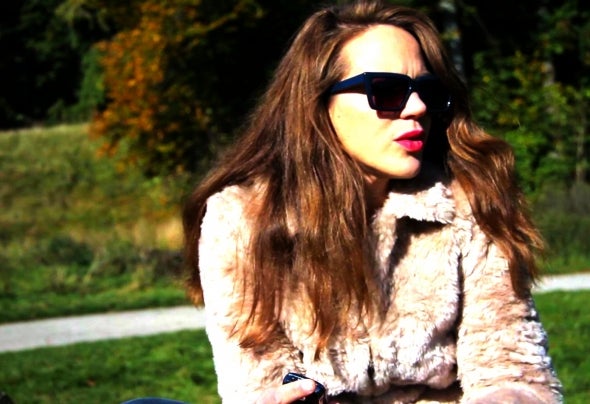 Once upon a time... ...there was a mother who owned a juke-box. On that juke-box, she played her favorite tunes, all day long and all of the night. Of course, the mother had children (otherwise she wouldn't have been a mother, you agree?). In fact, she had five children and the one in the very middle, the double sandwich child so to say, was a girl. Since the mother liked the songs of Cornelia Froboess and Conny Francis so much, she decided to name her little girl after her idols. And how lucky was that little girl: Instead of being named Francis or even Froboess, she was called Coni from that moment on. Well, you could call for Coni loudly and over and over again, only she would barely listen - from the first day of her life, Coni was busy enough to listening to the music, coming out of her mother's juke-box. She started to sing and dance along with her sister and brothers, all around the living room, all day long. But soon it came to little Coni's mind, that dancing and singing to the Music of the 1950's couldn't be what life was all about. So she waited, till her older sister was old enough to buy her own music. Since that day, Coni danced and sang to the songs of Kim Wilde and Trio, put on some wild Karaoke-Shows on the “stage” she ́d set up in her room,to all the 80's hits, and sometimes her performance was much more persuading than the playback of the original stars shown on TV. So Coni was a happy little Girl until the day she thought to herself:" There must be even more music somewhere? And if it's not hidden somewhere in this house, than it might be found somewhere out there - maybe in the big city!" Shortly after she figured that out, Coni left home, to meet her fate and to find more music in the big bad city. Well, the big city was Muenster, a rather quiet town in an even more quiet, rural area, but if you are fifteen years old, like Coni was at that time, even Muenster will appear very big, and even very “city- like” to you. Soon, Coni found more music and the music found her. On a bigger stage, in front of complete strangers, she now sang and performed the leading part of the Children-Rock-Musical "Zack". Coni had a lot of fun doing that work, you might as well say, she worked a lot while having fun. The best of it, according to her, was that she not only got in touch with rock- music but also with rap. The first song she recorded in a studio in Muelheim was called the "Arbeitslosen-Rap" (Rap of the Unemployed). An early work, which proves that Coni was not only ahead of her time concerning her qualities as an artist,but also as a fortune teller. Unfortunately, it is not always great to be ahead of time. Before Coni could go out to discover the whole wild world to find even more music out there, she was forced to get her high school diploma first. After she got it on first attempt, an energy boost took her far away - to the Carribean Islands. There she found the origin of music. She performed with the famous rock-bands of the Dominican Republic, mostly unplugged. Coni could have had a nice and cozy life at the beach from that time on, if... well if she didn't feel that there was even more music, she had to discover - perhaps even not that far away from home. Coni followed her heart (again!) and reached Swingin' London, which wasn't only swinging at that time but mostly vibrating in it`s underground scene. Coni started experimenting with electro sounds and learned from the Metalheadz-Posse. But still, Coni was missing something - a certain ingredient to the mixture, that would finish her personal “secret recipe” of her very own music. In search of that secret spice, she ran into Andy D, who gave Coni a taste of hip - hop and reggae while they ́ve worked on different projects together. Thankful for his ideas and input, but (what else did you expect?) still not having found quite all what Coni was looking for, she returns to Germany. And bingo! Coni meets the musicians of NSF, an elektro-pop-project to german lyrics. She decides to hang out with them for a while... and, all of a sudden, in the heart of Cologne, Coni realizes that she travelled the whole wide world to collect all those pieces of music that make "her" music that special. She's got all the different ingredients now, but who will show her how to combine them right, for her own personal and unique style. Help is knocking on her door, impersonated by her old friend Andy D, who did not only bring a few great songs for Coni with him, but also is accompaigned by producer Michael Williams, aka "Keyboard Money Mike". Together, the three of them record some songs for Andy's new album. While singing, Coni realizes that she now knows how to do her own musical dish!Over the last years Coni has been singing, writing and performing with many great musicians, producers, people from many corners of the world. She feels home in many different genres and styles from Jazz to Deep House. Constantly she has released more and more electronic music with wonderful people like Sarp Yilmaz, Hakan Ludvigson, Esemdi, Worakls & many more, releasing on different Labels from Clubstream to VIVa MUSiC, just to name a few..In the future Coni will keep creating music, performing and living the dream. And if she won't fit in your box, you might just think about the fact that music will always be too big to fit in any kind of box!