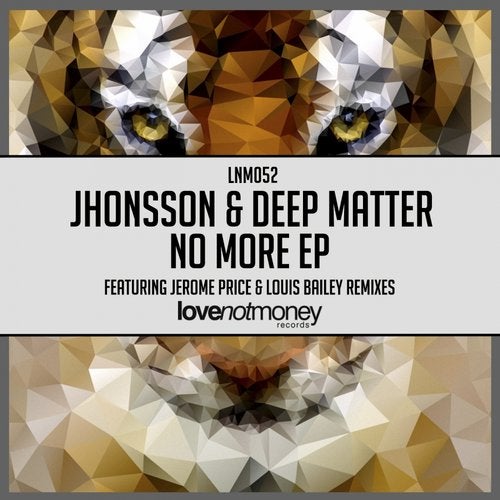 Love Not Money Records have achieved a lot since launching in 2011, winning the hearts of DJ´s and music fans around the globe and helping launch the careers of numerous producers. This is a truly modern imprint with huge ambition.

Next up they welcome Northern artists Jhonsson & Deep Matter into the fold with the stellar No More EP comprised of two deep cuts to sink your teeth into and remixes from two more young newcomers tipped to do big things, Jerome Price & Louis Bailey.

Getting the ball rolling is a collaboration between the two Doubt´ which kicks thing's off in true style, weaving a series of cheeky melodic riff's, swiftly layered with a swinging drum pattern, drifting vocals and an infectious driving bass to create a lo-slung House groover thats perfect for those summer daytime parties.

Second track Way Too Long, a solo project by Jhonsson, demonstrates the ease in which he travels across the spectrum of music, turning out a peak time groover. Its all about the heavy bass and catchy House chords on this one that work together to create a dance floor slammer thats already gained support from his fellow Barnsley native and good friend Hot Since 82 thus asserting Jhonsson as an artist brimming with vision and ambition.

On remix duties there's help from two more talented artists in the form of Jerome Price & Louis Bailey. Jerome a regular on the UK club circuit turns up the heat with his huge remix of Doubt', tightly programmed drums and a pumping bassline give a nod to the 90s garage house resurgent. The second remix coming from Louis Bailey, a fresh face to the scene who at just 19 years old has recently remixed the legendary Todd Terry on Hard Times Records which has paved the way for him turning out productions for a string of established labels, expect big thinks from him in the near future. His remix of Way Too Long' takes on a more underground approach as he turns out a deeper, stripped back work-out for those late night hours and rounds off the release nicely.