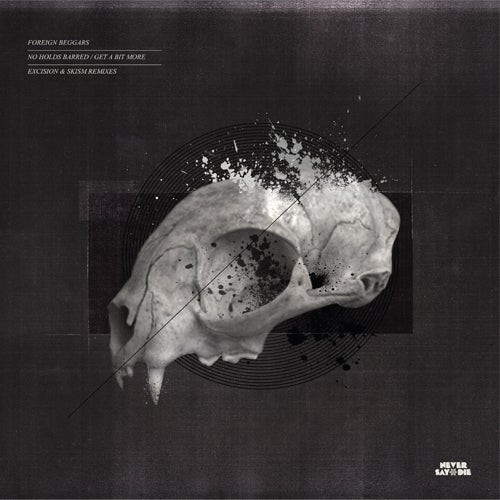 After the massive Ruffneck '09 we bring you the second installment on the Never Say Die Label courtesy of one of the hottest acts in the world right now, The Foreign Beggars.

United Colours of Beggatron is the fourth studio album from the Beggars, and unless you were living under a rock for the latter part of 2009, you would have heard the blend of unparalleled lyrical prowess and cutting edge production that has put the beggars at the top of their game. As both a tribute to the greatness of this album, and a warm up for the Beggatron collaboration / remix album, we are proud to bring you two of our favorite cuts remixed by the Never Say Die Camp.

The aptly titled 'No Holds Barred' is a clinical half time roller with showcases the lyrical ability of the group perfectly. It takes someone special to put their take on a production from Dutch power houses Noisia, so it was only natural we turned to the man who helped make our first release so special, Excision. Anyone who has heard anything this guy has done will not be surprised when we tell you that this is a full on sonic assault. Pitch bending, rib - rattling basslines make way for the trademark flows that we have come to know and love from beggars frontmen Orifice Vulgatron & Metropolis. Massive!

Get A Bit More (SkisM Rmx)

'Get A Bit More' is undoubtedly one of the highlights of the album and SkisM's ridiculous remix is the track that inspired us to put this remix package together. In under a year, the mysterious Skism has rapidly cemented himself in the darker side of the dustup scene, receiving support from top jocks like Chase & Status, Scratch Perverts, Freq Nasty, Rusko, Nero and Plastician. The remix is built around possibly the most venous raps ever to emerge from the Beggar camp, with horror soundscapes and more bass noises than you can shake a stick at, it's no wonder that scene leader Reso has caned this one every set for the past 6 months.

'Get A Bit More' is undoubtedly one of the highlights of the album and features some of the most intricate flows ever to pass the Beggars lips!
Baobinga has making a lot of noise recently and has picked up the support from the likes of Diplo, Drop the Lime, Crookers, Mary Anne Hobbs and all the bass music players. As with everything he does we found his remix hard to classify so we asked him to do it: Future Garage Bass Raggastep Bizzle was what he came out with so well stick with that!
In A similar vein but with a darker mood comes the remix from co- (Never Say Die) label owner Demus and fellow Kiwi purveyor of bass Dj Randomplay. Together these two have created a unique hybrid of Uk Funky style beats over a moody bassline with hints of electro, which has been setting tongues wagging.

The aptly titled 'No Holds Barred' is a clinical half time roller with showcases the lyrical ability of the group perfectly. To tackle the task of remixing this naughty little number we turned to one of the most forward thinking producers to emerge from the Breakbeat underground: Affinity. As a warm up for his phenomenal single Static (released on Never Say Die in May 2010) he has delivered a futuristic slice of Sci-Fi Funk which juxtaposes the pin point raps of the Beggars over 80s inspired key changes and cinematic Fx. Totally unique and utterly brilliant, Affinity is definitely one to watch.

No Holds Barred / Get A Bit More