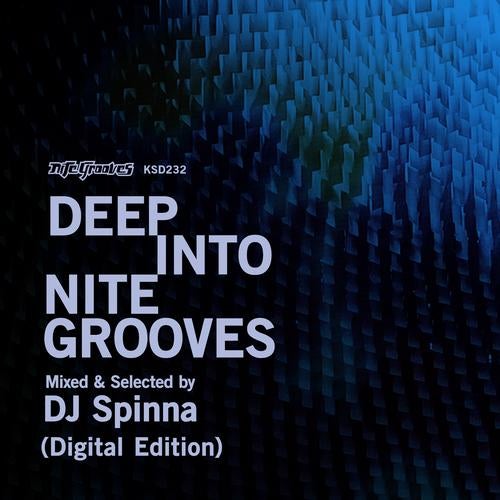 As King Street's sister label Nite Grooves gets ready to celebrate 20 Years in 2014, we wanted to tap into the very essence of its diverse and deep sounds with a respectable comp. For this we needed the compiling candidate whose indisputable musical history spanned eras, styles and functions. After all, if you only know House Music, you won't make good House Music. Enter the legendary DJ Spinna. With roots in Funk, Hip Hop, R&B, Jazz, Soul, he's remixed for Mary J. Blige, Stevie Wonder, Michael Jackson, De La Soul and more. He's collaborated with Eminem, worked with Pharoah Monch and has had two hip hop groups, Jigmastas and Polyrhythm Addicts. His remix of Shaun Escoffery's "Days Like This" is arguably one of the greatest remixes in Soulful House Music history and is still being played today. For just under 2 decades, Nite Grooves has been on the forefront of Deep House, contributing to the global movement it is today. Its been known for releasing the more underground profound cuts, like those found on this album, that have at one point or another, made their way onto nearly every dancefloor on the planet. On Deep Into Nite Grooves: Mixed & Selected by DJ Spinna we get treated to an almost 80-minute head-knodding journey of some of the grooviest tunes in the catalog. He kicks off the 22-song comp with the truly vibey Fred Everything & Olivier Desmet Remix of Dennis Ferrer feat. Bola Belo's Dem People Go! and leads us into deep tune after deep tune like Bassmental's Names Like?, Soundealers' "I Know You Want Me" (Langenberg Night Mix), Nil By Mouth's "Lunate," Sunshine Jones' "Dirty Love" (Aki Bergen & Daniel Jaze Soulvision Remix) and others. He also includes six brand new unreleased tracks like Gussy//Delgado's You Say Music, 9west's "Simple Things," Alex Font's "The Real Thing," Roland Nights' To The Point, Rancido's "Sphere" (Deep Journey Main Mix), and more. The vibe gets house-ier and the pump gets even deeper with Cevin Fisher's "House Music" (Supernova Remix), Technique's "This Old House" (Oliver $ Dub), Conga Squad's "Blow Up" (James Dexter Remix), Doomwork's "Red Lips." and the synthy "Electrikiss" by Eric Kupper presents K-Scope. The journey then takes a more alterna-dance direction with Spinna's own remix of Ptaah's "Suns Departure," which is followed by another Ptaah feat. Tiombe Lockhart track and his own re-edit of Kenny Dope's Remix of Dance Until We Die. Then we round off nicely with Kerri Chandler's Original Concept Mix of Ananda Project feat. Mia Tuttavilla / "Awareness," Eric Kupper presents K-Scope's "Dreamstate" and finally Luigi Rocca's Remix of G.IL.V.'s "Perspective." All these bassy, deep, thump tracks and silky smooth selections are as sensuous as they are cool and vibey. DJ Spinna puts them together seamlessly, creating a constant groovy ebb & flow, making this a great soundtrack to any deep house evening.