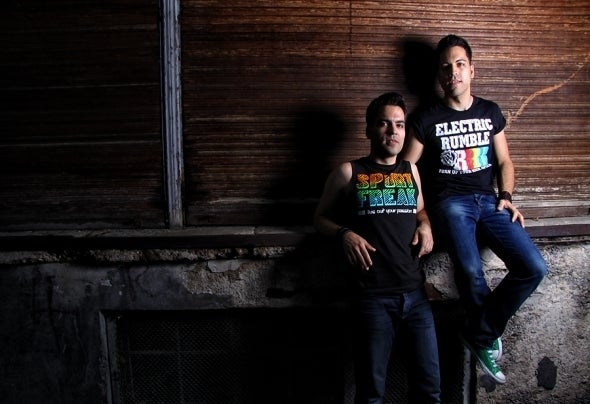 Zweiklang translates from German into English as "two tone" and perfectly sums up the DJ and production duo of Christian & Jürgen. The twins from Stuttgart are making a big impact in house music circles as DJs and producers, as well as running their own record label Solardish. Their style takes in an eclectic mix of soulful, jazzy and deep sounds with heavy Latin and African influences, alongside a healthy dose of tech house. The ‘two tone’ approach reflects the twins’ respective qualities and while the strong sibling bond is essential to the way they make music, both Christian and Jürgen bring different elements to the mix. The pair describe this as the “unity of difference” with Christian leaning towards harmonies, having studied classical guitar and synth programming, while Jürgen is a master of drums and percussion. The results are a blend of moody, melodic house sounds, warm keys and soulful vocals with massive rhythms and dancefloor-moving electronic grooves. Born in Stuttgart, Zweiklang were brought up on music and as soon as they were able they began to DJ in the city`s clubs and bars alongside the likes of Casey Hogan, Housecrack Sandro, C. Willy, Joxe, Jochen Pash, Katman Tom and many more. As their reputation spread they were invited to perform at the legendary beach bars Café Del Mar and Kanya on the “White Island” of Ibiza and other parts of Spain as well as Nikki Beach / South Beach (Miami). They also presented their own monthly radio show for Global Soul Radio (UK) and Smoothtraxx (Greece) and have appeared as guests for numerous shows and stations around the globe including Ibiza Global Radio (Spain), SSRadio (UK), Dance Box (Latvia) and Cyberjamz (USA). With production as their next goal the duo underwent studies in Music Technology and Sound Engineering in Argentina and Barcelona. The results were immediate with early successes including a remix of legendary Italian producer Joe T. Vanelli and winning the German music contest “Soundsgood” with their track “Electric Mediterrané”. More recently they have worked with many international record labels including TriCircle, Music Plan, Movin, Coffee Bar Music and attracted support from leading DJs such as Dubfire, D.Ramirez, James Zabiela, Timo Maas, Shur-I-Kan, Grant Nelson, Tony Humphries, Alfred Azzetto, Rasmus Faber, Richard Earnshaw, Davidson Ospina, Souldynamic, DJ Dove, Stereo Mutants, Nacho Marco, and most notably Roger Sanchez who featured their music on his `Release Yourself` show. Zweiklang have also performed on the Viva television programme in Berlin with vocalist Esteban Garcia. At the beginning of 2009, Christian and Jürgen combined their love of music with their university studies in business administration to launch their own record label Solardish. The remit of Solardish Records is contemporary electronic music that excites and energises the twins. With early releases coming from Systemfunk, Alvaro Hylander, Philthy Phonics, DJ Latinmix and Zweiklang themselves amongst many other international producers, the future is looking very bright for the label with reviews on iDJ magazine (UK), Our House magazine (UK), House Music With Love (Sweden), DJ Times (USA) and De:Bug magazine (Germany). Their latest release “Lucky No. 7” was at number 1 on the weekly “10 Must Hear House Tracks” charts @ Beatport. Musical quality, skilled technique, creativity, elegance, energy, connection with the public and a lot of true feeling: that defines the essence of Zweiklang.