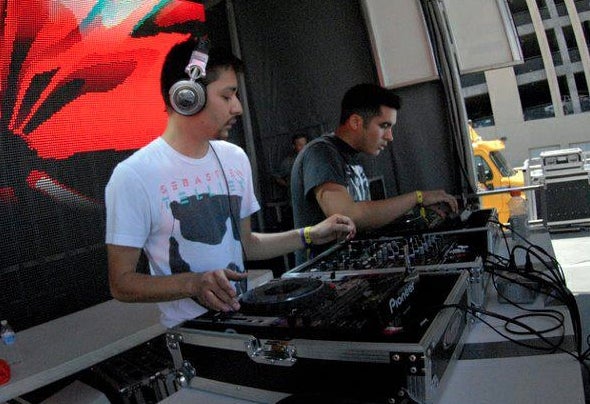 On one fateful day in 2009, two champions of the 7nite DJ competition tied first place for best performance. Each man looked at one another, and discovered that they had met their match, which previously had been equaled by no one. Both decided t o unit e t oget her t o become t he next John Dilingers of dance music, robbing innocent speakers of their beats, and taking control of hordes of helpless dancer’s feet.Formed together in early 2010, the mysterious masked duo known as Stereothieves spent the entire year in complete incognito from the public, refusing to expose information regarding their location or identities. They instead focused on creating aural weapons in their unknown secret studio location, only to gain spots on rosters with the most prestigious electro-house labels worldwide within a month of their concept ion. Becoming a local hit in t heir home t own of El Paso, Texas, and gaining attention early on from known electro heavy weights WoNK and KickOH, St ereot hieves have robbed t he compet it ion in bot h performance and production, and have not turned back from their heist since.A year later, Stereothieves were unmasked to reveal themselves as DJs “Accent N” and “Joey Funk”, who were the producers of releases on respected labels that included WoNKed, Big Alliance Records and Filthy Bitch. Specializing in Moombahton, Electro & Dubstep their music has been supported by such high profile artists as Laidback Luke, Kissy Sell Out, Figure, Bro Safari, Valentino Khan, Pickster One, DJ Sabo, Far Too Loud, JELO, DJ Bam Bam, Designer Drugs & Reid Speed among others. Using such platforms as blogs and social media to give attention to their music, their tracks have become a hit with fans, and Stereothieves work to constantly put out new music, via both released tracks and free downloads, in order to supply their supporters with the bass fix that they demand. Their tracks “Back It Up”,”Downlow’d”, and ”Mad-Sin” have all made Beatport’s Top 100 Charts, and the Stereothieves track “Speed It Up” was featured on Beatport’s The Banger Bros. Chart. They have also developed a strong following live, and their fun and energetic shows are known for always engaging the crowd and providing an astounding dance and party atmosphere that cannot beduplicat ed. Stereothieves have arrived full force to ignite the electronic music world on fire with their signature bass heavy sound, accented with monstrous builds, precise editing, and the ability to cross over into multi-genre production and collaborate with the hottest vocalists. Added to the UPG Artists roster in 2011, they are ready to tour the world and show more fans their unique brand of DJ dance performance. Look out for a new full length album set to be released by the end of the year and new remixed tracks coming out soon. With a current arsenal of releases, remixes and bootlegs, Stereothieves continue to create only the highest quality dance music and live performances that make crowds dance non-stop and beg for more! Stereothieves are on a mission to conquer your speakers and steal the show – only to leave you happy that they did.