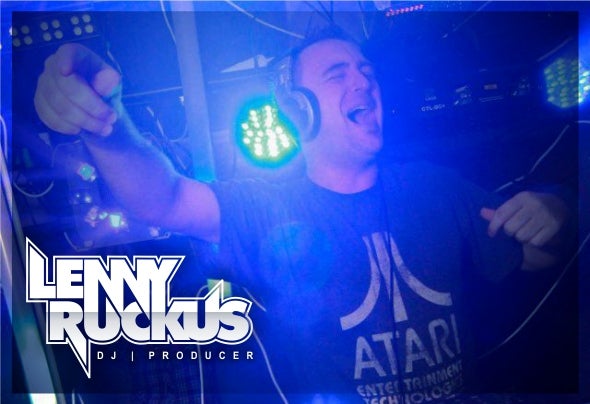 Lenny Ruckus (Lenny "Linus" Douglas, L7K, Freaky Fusion) has been making tracks and rocking dance floors for over 15 years. Early productions saw Lenny cutting his teeth with remixes of local dance artists and pop groups. This led to his own productions, and a refocus on a more underground sound. Support came quickly from the likes of Carl Cox, Dave Dresden, Menno de Jong, Matt Darey, Bobina, Jody Wisternoff, Darude, Mike Shiver, The Flash Brothers and more. In 2010 Lenny teamed up with Ana Vida to remix Dresden and Johnston's "That Day" featuring Nadia Ali. The remix was picked up by Menno de Jong and released on his "Intuition Sessions 2 – Rio de Janeiro" double disk cd. Other projects have received airplay on radio shows such as Pete Tong's Essentials Mix by Carl Cox on Radio 1. Lenny is currently working on many studio collaborations, remixes and his own original productions.Behind the decks Lenny does not disappoint, his wide range of musical interest is reflected in his sets and there is never a dull moment. His song selection and energetic mixing style leads to plenty of pumping, jumping, and hands in the air. Massive tunes that will rip and bang through the speakers are what he's all about. He's played at events from Miami to San Francisco, and you can be sure you'll be hearing much more from him this year! He is now a resident for the legendary House Nation Radio Show on 99.7 NOW FM in San Francisco. For the latest music and info please visit www.facebook.com/lennyruckus or www.souncloud.com/lennyruckusfor bookings e-mail: linus7k@gmail.com