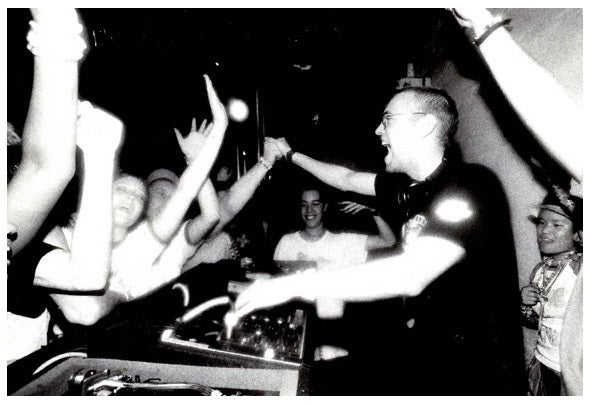 As a 16-year-old, Simon Apex became hooked on high-octane Breakbeat and started collecting tape packs. When the legendary Rhythm Station opened just miles from his home in the south of England, he became an immediate regular, attending most of the Fusion events. He was right there for the most memorable events in Rave and Rhythm Station history, significantly the first-ever Slammin Vinyl. A couple of years later Simon decided to be more than just a clubber, so he sold everything he owned to scrape up money for his first set of turntables, and began developing his signature sounds. Not long afterward he spied the woman who was to become the gateway to his life’s achievements – Angela. She was visiting UK from California, USA. They fell in love, married 6 months later, and after a year in the UK were ready to see what life together would be like on the other side of the pond. Simon began networking with Northern California key players in 1995, including Jay Vigor from Fuz-e Productions, the largest event promoter around. Simon started taking regular slots with Jay and soon became resident. The Subsonic Underground/Fuz-e combination was a huge success that led to hundreds of now-legendary events. Notable was the December 26, 1997 first-ever 100% Hardcore and Drum & Bass event in Northern California. The event sold out in 30 minutes! More than 700 people attended, but this was just the starting line for events that went from strength to strength for the next five years. Simon and Jay, Subsonic Underground and Fuz-e, produced the stages that debuted some of the world’s most renowned electronic music artistsAs more and more people asked where they could buy the music, Simon and Angela created the very first USA-based Hard Dance online music store in mid- 1998 that quickly became the go-to place for Hardcore & Hard Dance choonage in the USA. The online store led to a physical store location opening in March 1999. Subsonic Underground, the record store, drew shoppers from 3,000 miles away! Simon segued into music production in late 1998. His first track with Fade and Bananaman was titled Destiny. Within months, Destiny was being hammered on the world-wide circuit and was licensed for Hardcore Heaven Vol. 4 in early 1999. The experience gained in studio drove Simon to build his own. Simon and production partner, Ion, teamed up to build the original Stateside Studios that by end- 1999 became SSU Recordings, the first-ever USA- based UK Hardcore label.Not only was it the first but also SSU Recordings went on to become the largest. SSU-1 flew off the shelves, followed by releases such as SSU 4 – Superman that sold superbly on vinyl, then received licensing to Dance Speed, the massive Japanese compilation album that sold close to 250,000 copies! Over the next year the team kept on top of the release schedule and included two new labels, Mashed Up and Havinit Large.Around this same time, Simon had become good friends with DJ Lostboy, key player in the Southern CA scene. They immediately collaborated as SSU Recordings artists that forged the North-South bond with connections into every corner of West Coast Electronica. Simon & SSU Recordings received multiple licenses, including Bonkers on React, Bonkers on Resist, Hec-Tech, The Ministry of Sound’s Decadance, Warner Bros Nation, Decadance 2. Simon’s public relations star began to rise with regular coverage from mainstream press with a slew of articles in publications like URB, WAX, BPM, Insider, Fix, Massive, Lotus, Freebass. Simon received the 2002 Sammie award nomination for most successful Sacramento Electronic Musician.Simon still had an insanely hectic DJ agenda that had him on the road every weekend, taking him to almost every state in the USA, along with trips out to Canada, Mexico, The Drome in Sydney Australia, then back to the UK to play events like Raindance, Future Dance and Adrenalin. As DJ, Simon held residences with the largest organizations in the USA including Feel Good, Insomniac, and Skills, all regularly averaging attendance of 10 thousand plus, going as high as 30 thousand. A Nocturnal Wonderland broke the 50 thousand mark! The years had been very good, but what goes up must come down. In 2002 the USA scene was thrust into the limelight. Unfortunately, the public’s perception was built on distorted coverage such as Dateline 20/20’s Under Cover At Raves. The government came down hard on American dance culture, with repercussions that were, and still are, harsh. Promoters were being prosecuted for the actions of attendees. and police even shut down legal events. Such ever-increasing pressure took a heavy toll, with attendance at an all-time low, record sales dropping dramatically, and once kingpin organizations falling like dominoes. So, Simon sold the record store in early 2003 and turned his attention to writing music. Today Simon continues to spend as much time as possible in the studio working on new material. With over 100 releases under his belt, Simon still pushes the Breakbeat envelope hard. Recent collaboration with Derek Dee Dub received huge support from labels such as Mizumo Music, Uplifting Rhythm, and Can You Feel It Media. He also has several group projects under Embrace and Dirty Rotten Scoundrels with long-time production partner Danny Lostboy, and a recent colab with MR. Smart Bomb. If nothing else Simon promises to keep cranking out the choons for at least another 20 years! Simon Apex E Simon@StrategikNorth.com W: StrategikNorth.com T: 916.307.7199