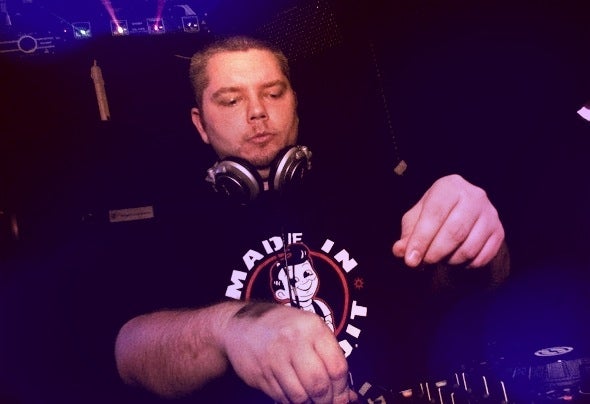 In the mid 90's, Garrett Dillon fell in love with electronic music via acts like The Prodigy,Aphex Twin,Autechre, and Underworld. In 1997 he attended his first warehouse rave in Detroit and immediately fell in love with the pounding kick drums and dark synths of techno.Soon after, Garrett (more commonly known as Dillon) purchased his first set of Technics 1200s and a Vestax mixer. Within months he was playing gig after gig and quickly building a fanbase. Naturally, the promoting bug bit next and he organized his first event in 1998. He has since promoted nearly 50 underground events in and around Detroit.In the early 2000's Dillon teamed up with local DJ Alastair Todd to form a label focusing on the hard tribal sounds of European techno.Around this time he started to play events across North America, from Toronto to Miami. The duo also performed together as a tag team, mixing everything from funky tribal to brutal industrial, while utilizing outboard effects and loop recorders (well before simply pressing a button in Traktor automatically did these tasks for you).After a brief break from the scene, Dillon resurfaced as a performer and promoter, throwing what many called "the best Detroit party of 2011". His performances began to bridge the gap between DJ and live performance, utilizing MIDI controllers, Maschine and a host of effects to dismantle, rebuild and recreate music on the fly. 2012 will also see the rebirth of Garrett Dillon as a producer, and the launch of his record label "Dystopian Rhythm", co-founded with Margin Walker. Several high profile names are slated to be released on the label, along with Dillon's own production.