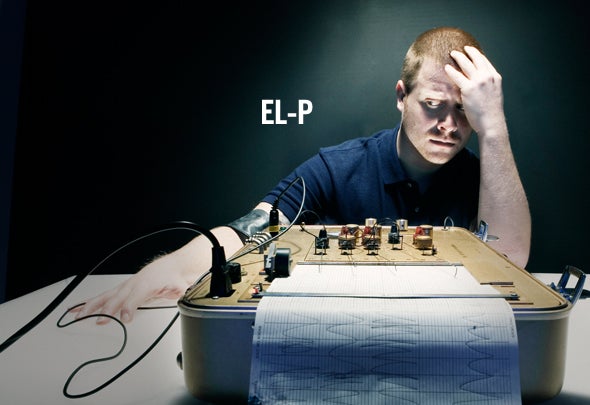 NYC-native El-P has been a major force in independent music for more than a decade. Setting off his career at age 17 with the release of the first Company Flow 12-inch 'Juvenile Techniques", he's been blazing trails ever since, introducing some of the most cutting-edge and important hip-hop music of this era. As founder, producer and main MC of indie heroes Company Flow, El-P quickly made a name for himself with fearlessly visionary production, profound lyricism and an uncompromising ethic. The group's seminal 1997 debut album Funcrusher Plus, was an underground smash (150,000+ units sold), celebrated by fans and journalists worldwide, earning the "classic" status now widely accorded it, and a major factor in the rise of indie hip-hop. In the process, it put the now legendary Rawkus Records on the music map, a label El-P would soon choose to depart from, shocking nearly everyone around him. But the man had a plan… Launching Definitive Jux in 2000, El-P finally had the vehicle to carry his vision forward. He's spent the past 6 years building what is now the pre-eminent indie hip hop label in the business, having given rise to some of genre's brightest lights, including Aesop Rock, Mr. Lif, Rjd2 and Cannibal Ox. His own debut album, the tour de force Fantastic Damage, was released in 2002 to a maelstrom of worldwide critical-acclaim, going on to become one of the year's best-selling indie hip hop albums. Since then, El Producto has had his hands full, producing, co-producing, executive producing and A&R'ing several projects.