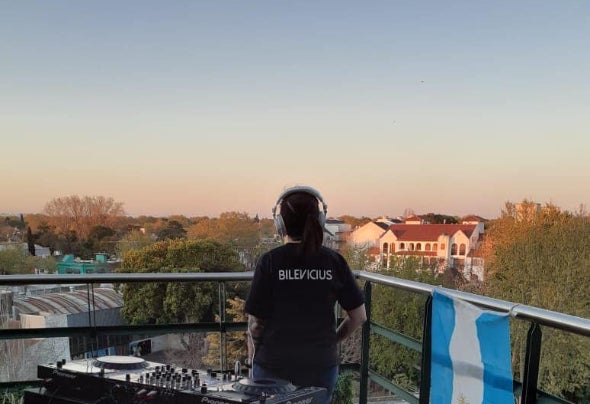 Bilevicius born in 1989 at Entre Rios, in the city of Villaguay, raised in the province of Buenos Aires,Argentina. At the age of 5 years her taste for music began to take steps, began to play musical instruments such as guitar and piano, also her taste for classical and Spanish dance.One of her grandparents was a guitarist of an Argentine folklore band, and there her got her guitar. After the years in 2003 began to like electronic music (Trance-House), she had a small collaboration in a school lm, which won the second prize of a festival of schools. In the year 2005 she began her studies in the Yamaha Academy. At the same year she started with her radio show on the radio EXA FM Guatemala, her radio show was dedicated to trance and other genres (Trance & House), and ended in 2016.Already in 2015, she was in two Argentine radios called ELEKTRONA, UNDERSTATION RADIO, with their radioshows, addition to a Mexican radio station called TEMPO RADIO MX .At the same time she was working as a dj, and studying at the school of music of Buenos Aires, was received in 2016 as production technique of electronic music. Meanwhile her has gotten work in another Argentine radio that continues to this day called FULL TIME RADIO with her radio show MAKE SOME NOISE RADIOSHOW.At the same time she began to listen to other style (progressive house, tech house, techno), until today.2011-2016: My radioshow LISTEN TO THIS (Exa Fm)(Guatemala) 2015-2017: My radio show Trance In The Air. (Tempo-radio) (Mexico)2015-2016: My radio show Trancesonico (Understation Radio) (Mendoza,Arg) 2016-2020: Every Saturday MAKE SOME NOISE by Full Time Radio (Buenos Aires,Arg). 2020: Every Friday my radio show BREAKING THE SOUND by Understation Radio (Mendoza). Every Saturday my radio show BREAKING THE SOUND by Expo-Radio (Lincoln,Buenos Aires). Every Thursday my radio show MUSIC TO GO by Mixing radio LABELS: White Line Music-Three Sounds Records -Drehmoment Records-Finish Team Records-No Limit