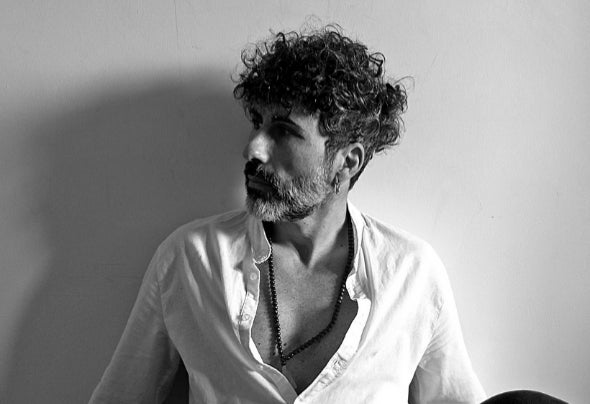 Characterized since childhood by a strong interest in music in all its genres and facets, Indiano approaches the console at the end of the 80s starting his career in private parties until he had, in the early 90s, his first contract as resident DJ in one of the major nightclubs in his city, the "Caesar Palace". In this first phase he proposes in his Dj sets a musical selection that passes from Dance to Techno. The mid-90s marks a turning point. Indiano approaches Progressive in whose melodic sounds he finds a new source of expression never tried with Dance / Techno music. He begins to propose original live sets characterized by innovative melodic and rhythmic sounds. The originality of his work begins an intense period of collaborations with clubs, organized movements, radios in his region and beyond, during which he has the opportunity to share the console with the most important DJs of the Techno-Progressive scene of that period. In 1996 he also started his production activity with CRYPTIN Ep a Tribal / Progressive production produced by Trance Traxx - Milan In 2006 he took part in the national contest organized by Notte Insonne and "Trend Discotec" and won in the new Italian talents category. The jury rewards him for his technique and originality. Today he is a collaborator and DJ of several Italian and International Radio such as: Befunk Radio (Fuerteventuras Canaries / Spain), Rebel House Radio (United States) Ibizastardust Radio (Spain), Radio Antani (Perugia Italy), Radio Zeus International (Cremona Italy) He works as a producer and remixer for labels such as Bach Music, Sound on Sound, Rebellious Rec, LDN Trax, INNU Records, Marktek Records. Indiano researcher and indefatigable experimenter proposes in his live sets a selection that captures multiple genres such as Organic House / Downtempo the Melodic Deep House, and the Afro House all characterized by its unmistakable Melodic sound.