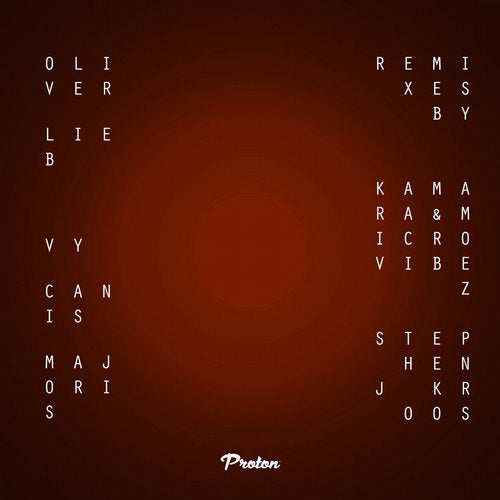 In the spring of 2015, Oliver Lieb lit up the night sky with two works of brilliance, shimmering and shining in techno luminosity. Both "WASP-17b" and "VY Canis Majoris" showcased the German maestro's redoubtable talent and it is with immense pleasure that Proton Music now announces two remixes of the latter with interpretations from the cream of modern Dutch talent.

Kamara and Microvibez are no stranger to success in their own right. Kamara, a trio of musicians formed in 2010, has seen Kasper Kwant, Martijn Jacobs and Ralph Jacobs, develop a distinctive sound that blends elements of tech house with influences stemming from African and Eastern rhythms. Having already seen their work allied to Sudbeat, Doppelgaenger and Refuge Digital, joining forces with fellow countryman and Refuge owner, Microvibez, seemed a logical next step. Microvibez himself is no stranger to success as an exciting live act has seen him entertain the massed ranks of festival goers at "Festivaart", "Have a Nice Day" and "Greenbeats" with a vibrant and dynamic sound supported by Carl Cox, Sam Paganini and Slam. His music signed to Bush Records, Alchemy and Lieb's own Maschine, Microvibez's triumph is assured.

Joining forces to tackle "VY Canis Majoris", the Kamara and Microvibez remix is a dynamic study in techno prowess. A rhythmic structure that draws parallels with its original counterpart, Lieb's buzzing, pulsating bass line rises to the fore as a sublime key change provides perfect accompaniment for the original melodic phrase to make its presence felt in a variety of guises, rising and falling through exquisite reverberations.

Stephen J. Kroos is a man with legion production credits to his name for myriad labels. A DJ from an early age, the 1980s saw performances in the Amsterdam capital before running "The Feeling" club night which became one of the high points in Amsterdam's club history. A producer of considerable repute, over 150 production credits for the Spring Tube family of labels have illustrated success on a grand scale as have a swathe of credits for the Anjunadeep imprint. Inspired by the techno genius of Kraftwerk and the experimental genius of Jarre and Eno, 2014's two-part full-length album extravaganza marked a high point in the incredible production career of one of Holland's most innovative and creative talents.

A regular on the Particles imprint with a host of original and remix material including 2012's "Fragile" and 2014's "Kraton" EPs, Stephen J. Kroos returns to Proton after a pair of 2010 Colourblock remixes. Taking a typically innovative approach to "VY Canis Majoris" a huge, throbbing, thumping rhythm beats out a metronomic techno cadence as Lieb's original elements begin to force their way into the reckoning. Vocal cuts, smooth pads and Kroos' additional production make their play before the melodic sequence so fundamental to the original sees its presence felt in no uncertain fashion accompanied by huge analogue stabs.

Two reworkings of from Kamara and Microvibes and Stephen J. Kroos have shown that "VY Canis Majoris" is no fading star as Oliver Lieb continues to burn with incandescent glow.