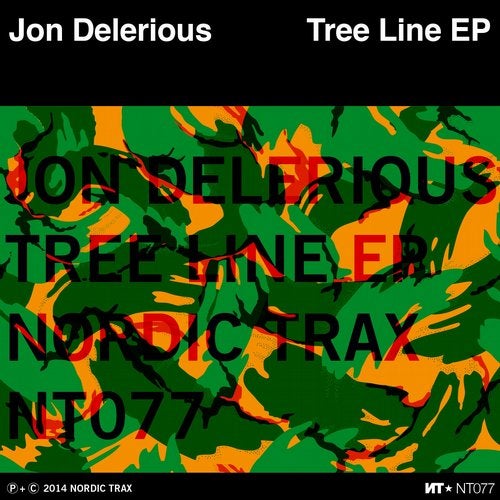 One of Canada's foremost producers of underground House Jon Delerious returns to Nordic Trax with the Tree Line EP. A near twenty year veteran of the Canadian scene, Jon has released three previous eps on NT and the critically-acclaimed album 'No Warning', released in 2004.

The six-track Tree Line EP bumps between the deep, dark basslines of One Twenty Two & 'Let It Ride' to the more uplifting vibes of Come On & 'Tree Line'. Never afraid to switch things up, downtempo heads will surely be head-nodding to the summertime vibes of 'Speckdrum'.

Jons dub-influenced house for Nordic Trax in the past has caught the eye of deejays and tastemakers worldwide, ending up perhaps most notably as the lead track on Lee Burridges Global Underground compilation. More recently he's released music for Lost My Dog, Soulstar, Llama Farm, Moonlight & Tenor. The Huxley Remix of 'Believe In You' was a break-out track and supported by the likes of DJ Sneak, Aki Bergen, Inland Knights, Brothers Vibe, Soul Minority, Mark Farina, Demarkus Lewis & many more.

A native of Calgary, Jon is a regular on the Western Canadian music scene and has been playing the infamous Shambhala Music festival since it's inception. Alongside many club gigs and residencies in his home town, Jon is the 'go-to' dj for touring royalty having opened for everyone from Kevin Saunderson to John Aquaviva, Jimpster, and many more. On the Tree Line EP he's joined on by rising Calgary talent, Matt Caine. Matt has releases on Moonlight, Filter Music, Kiko Recordings, Flavorite and Vivid North and has hosted the likes of Shur-I-Kan, Fred Everything, Luke McKeehan & Pezzner to name a few.