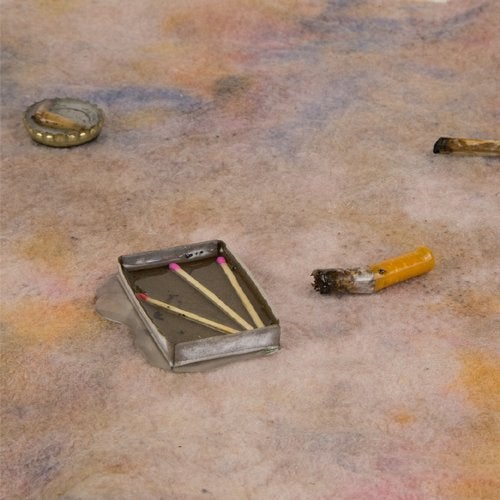 After more than three years of silence as a producer, Efdemin a.k.a Phillip Sollmann returns with a striking hybrid concept that merges the album format with the ?continuous DJ mix? format, presenting completely new material in a seamless manner. This CD-mix, named Naif, officially reinstates his label of the same name and is a sprawling tour of inner space featuring 19 distinct tracks from fellow producers (e.g. Margaret Dygas, Steve Bicknell, Jeroen Search, Pom Pom, Marco Shuttle or Gunnar Haslam) along with an additional ten that feature Efdemin himself (either as soloist or collaborator). The release condenses his decade-long DJ-ing journey and evolution as a producer into a single potent elixir of contemporary techno.?
Owing to his additional projects, such as collaborating with PAN artist Konrad Sprenger on a modular organ system to be installed in museums, or scoring for a Neue Musik ensemble, the Berlin-based Efdemin is known as hiker between the worlds . His regular stints at Berghain or Panoramabar, his partnership with established labels (e.g. Ostgut Ton, Dial, Sushitech) and the leadership of his own Naif imprint all demonstrate that since more than a decade.

Naif consists of completely unreleased / never-before-heard material from both himself and valued collaborators, all of which will eventually manifest as EP releases: two will be available on Curle, with an additional five on his own Naif label. All of the individual contributions are combined here in a painstaking assembly process that took an entire year to complete, and the result is that the album flows with an almost paradoxical effortlessness from one style to the next; a conscious choice on Efdemin's part to give this release a longevity well beyond the typical lifespan of genre-specific DJ mixes. Besides the strong collection of tracks from well-known and undiscovered producers alike, it?s Efdemin's own contributions to the mix that stand out and reinforce his unique position.?
This becomes evident once the album kicks off with spectral, distant bells and homemade modular synth sounds leading into more unreleased Efdemin pieces, ?Watte? and ?Sirius,? whose deep dub resonance locks in the attention of those who were merely curious at the beginning of the trip. Later in the mix we find the weird electroacoustic textures of 'Laveline', a collaboration with the aforementioned Konrad Sprenger The standout composition on Naif is Efdemin's infectious microtonal techno ?Move Your Head.? where Sollmann's voice hovers over distorted 808 patterns and immersive justly tuned synth pads, pointing the way towards the formative, trailblazing influences ? Silver Apples, This Heat and the drone aesthetic of Tony Conrad ? which embodied the seeking spirit of techno before the genre as we now know it existed.?
Throughout the remainder of the mix, a supporting cast of favorites turn in everything from blinding energy (Steve Bicknell's ?Running Man?), to unrestrained ecstasy courtesy of Inland / Ed Davenport, to the overdriven lockstep groove of Cassegrain's Rhyw. The final bow comes in the form of the Efdemin track ?Love,? which both pays homage to classic house tracks and refer to his early productions at the same time.