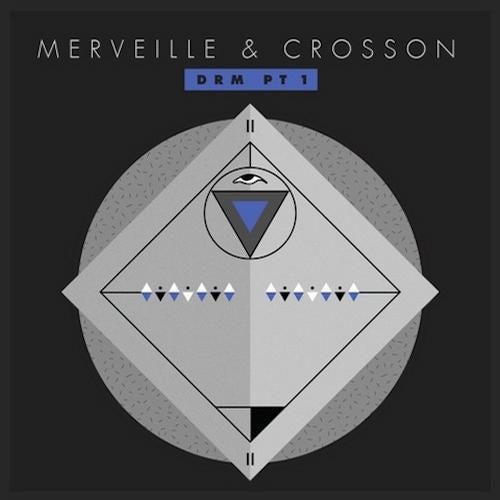 The ever inventive and constantly challenging VQ imprint once again expand their sonic spectrum by releasing a superb EP of enchanting, harmonic dance music from the other side of the dancefloor. Never one to be pigeon holed for one particular sound the latest VQ release by Merveille & Crosson pushes the envelope further as they produce a sublime three track E.P. of beautiful, innovative electronica, but still with one eye on the dancefloor.

Ryan Crosson is one quarter on the eponymous Visionquest crew, an impeccable DJ and renowned producer he has recorded for such labels as M_nus, Wagon Repair, Spectral and Supplement Facts amongst others. France based Cesar Merveille is an irrepressible member of Lucianos Vagabundos crew, and regularly records on Cadenza. Old friends and cohorts Ryan and Cesar pooled their collective talent to make a unique debut album for Visionquest. This 12 is the first half of a double single release. The second part is released early next year with both parts comprising in a Merveille & Crosson artist album, released shortly after the second single on Visionquest.

Cesar & Ryan have utilized elements of electronica, jazz, deep house, ambient and techno in this EP, all expertly woven into this radiant tapestry. The A side features DRM; loose tribal drum patterns underpins the lazy groove as the urgency of the driving rhythm pushes the track forward whilst the achingly, soporific marimba delivers a haunted, melancholic song to the soul. Evocative and mesmerizing DRM is an exquisite work of beauty, suitable for dancefloors and soundbathes alike. On the flip Orca is an overwhelming heady blend of effervescent chimes and xylophones rising and crashing as the energy swells amongst the percussive waves as they rise and fall only to crash and breach around the syncopated rhythms of the shore. The omnipresent sub bass serves as the anchor as the drums and hi-hats deliver us to the dancefloor with an uncontrollable immediacy! Finally The Day You Left is the EPs swansong. A clever piece of heavenly sonic sculpture, its transcendental, illusive nature charms the most savage bea(s)ts. A beautiful piece of wonderment and awe that is as equally reminiscent of Global Communication 76 14 as of Jean Luc Ponty, which is no mean feat. A fantastically executed and accomplished EP what bodes well for the forthcoming album