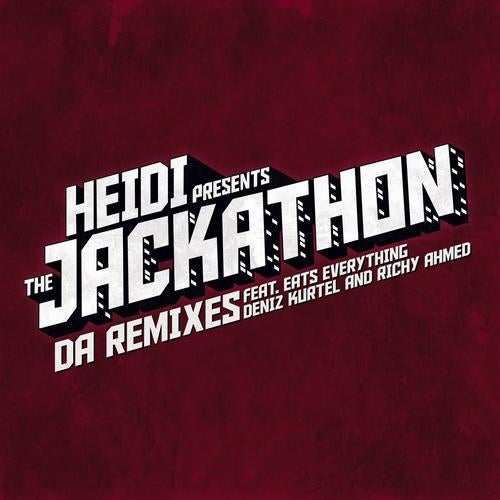 In the beginning there was Jack and Jack had a groove, and from this groove came the groove of all grooves... And house music was born. House is an uncontrollable desire to jack your body. And in this house the keeper is Jack. Until he met Heidi. Last year queen of jack Heidi flashed the world with her Jackathon compilation. Now Get Physical present three killer remixes from the compilation at the hands of key game players Deniz Kurtel, Richy Ahmed and Eats Everything. Wolf + Lamb home girl Deniz Kurtel is one of the most talented and respected producers in the industry. Honing her skills with the same dexterous elegance showcased in her LED sculptures, the Deniz Kurtel sound can be experienced across many shades in the spectrum of house. Here she adds her own spin to Solomun's 'What the Funk' with a bouncing bassline and jacking beat. Hot Natured star Richy Ahmed provides his smooth twist on Mathias Kaden's original 'Jackathon'. Not too much, not too little, it's just right. At the forefront of the new breed of British DJs redefining house through inspirations of funk and disco, Richy has spent the past few years taking his unique sound to the best parties in the world including Burning Man, DEMF, Glastonbury and Sonar. 'Whiff It Yawl' by Jamie Jones is taken into the hands of Bristol's finest Eats Everything. Adding space too it, an airy mix of sound reverb adds ambience and energy, while the track slowly reveals itself and the powerful kick drops with full force. This peak time bomb is assured to destroy any dancefloor it hits! A female dance music icon, Heidi is often the unsung hero of her tribe. Hers is one of the only mainstream radio shows consistently championing the sounds of the current house and techno underground movement and a big part of that is reviving the music of the early Chicago masters. With a foot in the past but an eye on the future, Heidi is redefining the jack in Jackathon and always brings the
funk.