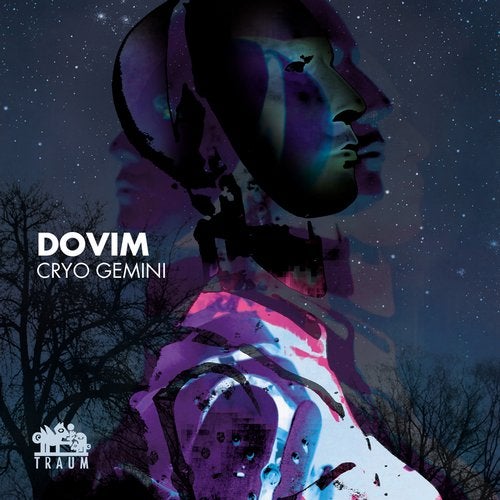 Some months ago Dovim released on our imprint MBF LTD and instantly took the music world by surprise with a stunning EP, reaching out far.
So we asked him this time if he could compose an EP for Traum. He came up with these 6 stunning electrifying songs.
Dovim does not belong to any scene at all but is writes electronic music truly for himself and plays classical music as a day job.

The concept behind the "Cryo Gemini" EP is heavily related to science fiction.
"Cryo Gemini" pulls together the idea of freezing coldness (emphasized by a lot of FM-Synthesis and virtual analog stuff...) with twin genetics related to the idea of artificial intelligence.
For Dovim it was important to find a balance between melodic techno and abstract musical textures. Technical, weird, bizarre sounding elements and traditional tones. He has mixed different production tools to get closer to something eclectic. There are ambient, techno and experimental elements in his music aiming to create something coherent!

Musically his "Cry Gemini" EP strongly reflects unorthodox ways of songwriting in which an emptiness or solitude is never scaring but inspires to be slowly padded with colors and life.The opening track "Frozen Receptors" starts with a robotic movement but ends quite romantic if you will.
Everything is loosely connected but melts together in a split second, these moments make the track so luscious.

"Cryo Gemini" could take place in a laboratory which undergoes a change though its transformation from grey to colorful, blooming life!A true masterpiece in it own cosmos which could interest Max Cooper and Egokind fans.

"Mare Frigoris" was released for the first time on Tour De Traum XI and was produced with the idea in mind of writing music for Traum.The track has a slightly more discoish ambience though twists and turns make it a total outsider. Dovim manages here to have different worlds collide in a highly artistic way that leave us baffled.

"Alphamorph" starts were "Mare Frigoris" ends. Maybe it is the nasty little brother playing tricks on the family members."Alphamorph" pulls mesmerizing melodies out of the hat and surprises with small digits of improvisation that keep Dovims music so alive.

"Axon Identity" is at one point a perverted version of Derrick Mays "Strings Of Life" and then at another one, it is the total opposite. Dovim is a genius.

"South Pole Origin" is exactly what is says, an expedition into ice cold territory. Last but not least it is a thrilling Giger fueled soundtrack that mutates into something very different, rather a revelation of its own kind, shiny and eternal.

We asked Landmark for a techno interpretation of "Frozen Receptors" which he agreed to write.So his version is genuine cool techno with one more twist then what you are accustomed to hear from him. So make sure to play out this track!

Inkfish are a Swedish collective consisting of Mattias Lindblom, Jesper Lindqvist + brothers Andreas and Johan Hermansson. They are known in the world of electronic music for their hypnotic and slowly emerging but substantial music and with their remix of "Frozen Receptors" they live up to their reputation of masterfully crafted music.

Cosmic Cowboys have written a deep symphonic version of "Frozen Receptors" which tackles the track from a totally different standpoint, injecting fine glam and deep house character into the track!